Released in March of 2020, Warzone is one of the few free-to-play games in the decades-old Call of Duty franchise.

That said, Warzone marked the start of Season 4 a few days ago. It introduced some points of interest, two new maps and some weapons and skins. But those who were able to unlock False Prospector camo are now complaining about the skin not staying on loadout weapons (1,2,3,4,5).

Players say the skin is unequipped after they leave gunsmith or after the end of every game.

Some say the False Prospector camo is not sticking to any gun other than the H4 Blixen.

While Raven Software is unaware of the issue where the False Prospector camo is not staying on weapons, we came across some workarounds that might help with the problem.

The first one requires players to start the match, equip the camo on their weapons and stay on the loadout screen until the round starts.

Another workaround involves making a custom blueprint and equipping the camo there.

Same here. What I did I’d make a custom blueprint. Another method that always works is to stay on the loadout screen while loading into the game
(Source)

We hope Raven Software soon patches the problem. When they do, we will be updating this space to reflect the same so stay tuned. 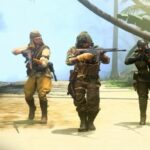 Here's how to rotate an image in Google Photos