COD Mobile Oden Damascus camo bugged or not unlocking? You're not alone

COD Mobile is currently the only game in the Call of Duty series for mobile devices. However, in the future, COD Warzone Mobile will arrive as a new game for smartphones and tablets.

COD Mobile seeks to offer the frantic multiplayer experience of the original games. For this, it includes both the traditional modes and the Battle-Royale mode.

COD Mobile has multiple game modes directly inherited from the PC and consoles titles. There are also many maps, items, weapons, operators and more.

The base game experience is enjoyable for free. However, COD Mobile uses a microtransaction system to unlock cosmetic items, although many can be unlocked by just playing.

‘Damascus’ is a mastery camo that is obtained by leveling your loadout to max (getting Gold or Platinum rank).

Hey did anyone have issue getting the damascus? I have diamond on every weapon but still damascus on oden is locked for me, it says unlock gold on all. I double checked, with all the weapons, I have diamond on all. Is this a bug which is known to devs?
Source

For some reason I couldn’t unlock the platinum camo for the oden. Idk if it’s a glitch or something because all my assault rifles are gold. I really was pissed because I wanted to put the platinum camo on the oden skin from the battle pass😪🥲
Source

Camo not unlocking even when platinum on all weapons

According to reports, the COD Mobile Oden Damascus camo is not unlocking even for players who have achieved gold or platinum rank in every weapon (including secondaries).

Happening to me as well, I got gold in every weapon, even the secondaries, but no damascus for me golden Oden.
Source

That happened to me as well! Cuz I have everything gold,platinum and damascus
Source

In some cases, players got the Damascus Oden camo once unlocking the current Battle Pass skin. But, this will require spending real money on the Battle Pass.

There is no official acknowledgment on the issue from COD Mobile dev team yet. We will update this story once new developments arise in this regard. [Updated] Roller Champions players matched with only 1 or no teammates (2v3 or 1v3) in Ranked matches, demand fix 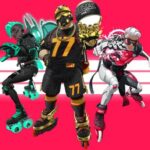