Published by Ubisoft, Far Cry 6 is the latest games in the decades-old open-world Far Cry series. The game is set on the fictional island of Yara, where rebellions fight against the government, controlled by a ruthless dictator.

The first-person shooting game also features a cooperative multiplayer mode. It is divided into seven terrains, spanning across dense jungles to urban areas.

That said, players have reported several issues such as the bugged Surgical Extraction: Sergio’s Office mission and some spawning in ocean after dying or loading a save.

Adding to the list of issues, Far Cry 6 players say they are not receiving AR-C even after completing ‘A Little Birdie Told Me’ Treasure Hunt quest (1,2,3,4,5).

Reports suggest that the game shows it as locked even if players complete the Treasure Hunt. Players say they tried generic troubleshooting steps like restarting the mission, rebooting their systems and verifying game files but nothing helped.

Below are some reports from Far Cry 6 players who didn’t get the AR-C after completing the ‘A Little Birdie Told Me’ Treasure Hunt quest.

Hi, i played the Stranger things crossover yesterday and received “the comrade”. But as far as i wanted to put a silencer on it i played the a little birdie told me treasure hunt and i also completed the treasure hunt. The only problem with that is that i opened the chest and my rank increased but i didnt receive the AR-C and also the treasure hunt was gone afterwards. Is there any fix to this?
(Source)

I’m also having this issue on a new save. It was the first mission I tried to complete after “Libertad Rises”. Happened to me twice. Tried it once, no reward, then completely restarted the save and it happened again. I really hope there is a resolution soon. I’m not to keen on continuing with that save until there is a resolution and would very much like to.
(Source)

Thankfully, Ubisoft Support Staff commented on the issue and said they have escalated the issue to the development team for further investigation. However, there is no ETA on when the problem will be resolved.

Hey @DismissedClaim, thank you for sending this over and I can now confirm that the details of the issue have been forwarded to our development team for further review. If we have any difficulties with reproducing the issue on our side, we may update the thread accordingly. Until then, apologies about any inconvenience and if you have any further queries or run into any other difficulties, feel free to get in touch at any time!
(Source)

As always, we will update this space when we come across more information so stay tuned to PiunikaWeb.

11:48 am (IST): Ubisoft support has confirmed that the issue with AR-C will be resolved in a future update.

Just a quick update – this particular matter is set to be resolved with one of the upcoming updates, however more details to follow at a closer time, so thank you for your continued patience and if you have any questions – you know where to find us! 🙂 (Source) 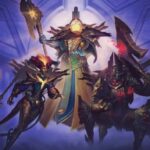 [Update: May 13] Smite, Paladins, & Realm Royale down on Xbox, PS4, PC & other platforms due to server maintenance