YouTube Vanced is used by a lot of Android users as it allows them to bypass ads, while offering many handy features.

While users have been enjoying the uninterrupted video streaming service, the YouTube Vanced app has been upgraded for good.

The latest Vanced update version 16.14.34 brings about a lot of improvements to the modded YouTube app.

It offers the fixes for the login bug along with SponsorBlock issues and support for the SponsorBlock voting segment.

On the other hand, the Vanced manager and YouTube Vanced music apps have not seen any updates. 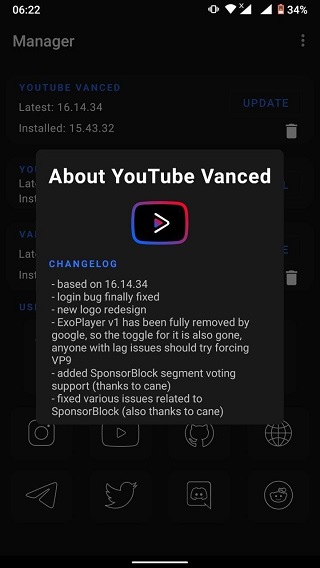 Apart form that, the Vanced app has received a new icon face lift and its features have only improved.

The changelog clearly outlines that users can now use the SponsorBlock section for voting with the latest update.

Also, while not a major change to the design itself, the new logo brings a fresh feel to the app. As mentioned earlier, people use YouTube Vanced mostly because it blocks ads and offers a smoother interface as compared to the native app.

So, if you are a YouTube Vanced user, you can get the latest app update by heading over here.

Moreover, those who want to use Vanced without rooting their device can try Vanced MicroG to avail the said features without any hassle. That said, we will be back with more such stories as and when new information and details surface so stay tuned.

In the meantime, you can check out our dedicated YouTube section as there are more such stories over there.

IST 06:20 pm: The YouTube Music Vanced app is now getting a new update to version 4.30.51 which fixes for the ads and other mods toggles, while the ads toggle has now been shifted to the bottom of the mods settings.

Changelog:
– Increased base to 4.30.51
– Fixed mods(including ads) toggles default value
– Ads toggle has been moved to the bottom of mods settings listSource

Moreover, they’ll be removing all the download links from the website in the coming days. And although the currently installed version will work, it won’t receive any new updates.

Vanced has been discontinued. In the coming days, the download links on the website will be taken down. We know this is not something you wanted to hear but it’s something we need to do. Thank you all for supporting us over the years. (Source)