At a Glance widget by Google is a simple yet most useful widget on Android devices that provides a quick look at important info without opening the app.

Google introduced At a Glance exclusively for Pixel users and then eventually it made its way to other Android devices.

This widget gives you a glance at information such as Weather, Calendar events, reminders, and work profile. It shows on both home screen and the lock screen of your smartphone. 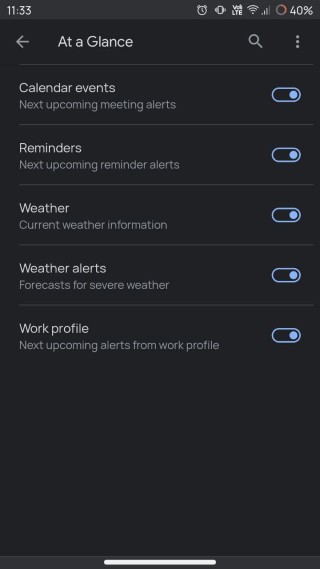 However, lately, some users are also facing issues with this widget after the recent Android 12 update. At the time of beta 5, users reported about At a Glance widget’s broken settings and weather issues.

As soon as the issue with weather got fixed, another bug popped out. As per reports (1, 2, 3), some Pixel users can’t access calendar in At a Glance widget.

Since the weather was added back to the At a Glance widget accessing the calendar no longer works. Does anyone know if that function will be coming back? The whole use for the widget was to be able to open the weather by tapping on that and whatever calendar app you wanted by tapping on the rest of the widget. (Source)

After getting frustrated by this issue, those affected took to the official Pixel support forum to vent their anger at Google as they seek for a solution.

Fortunately, Google is aware of the glitch, at least according to a product expert, who notes that it’s a known issue and recommended the affected users should send feedback directly to Google. This can be done by heading to Settings > Tips & support > Send feedback.

A temporary workaround that affected Pixel owners can try to overcome the missing calendar issue has also been shared below.

– In Settings, go to the At a Glance section.

– Now, only the date is displayed. You cannot remove it (yet). BUT, tapping on the date opens the Calendar.

– Next, add one of the weather widgets from the Google group. Tapping on that widget will open the full weather app. (Source)

The above-mentioned workaround may fix the calendar issue for you, if not, you’ll have to wait for Google to fix it officially, probably with a minor Android 12 update or via a security patch.

That said, we will keep you updated on the further development of this story as and when anything new comes to our notice. You can check out our Android 12 bug tracker for more.

We are having a poll asking users if Google should listen to user feedback and tweak the ‘At a Glance’ widget accordingly. You can let us know what you think by voting in the poll.

12:29 pm (IST): The latest Android 12L update brings a fix for the issue where Pixel users can’t access the calendar from At a Glance widget.

Google has now added a shortcut to open the Calendar app from At a Glance widget on the home screen.