Developed by Apple Inc., the iPad is a tablet-based computer that is the spiritual successor of the Newton MessagePad. As of 2021, Apple is the leading tablet vendor and accounts for more than 38% market share.

The tech giant also sells a bunch of accessories, one of which is the Apple Pencil. The stylus communicates via Bluetooth and also features a lightning connector used to charge the stylus. But as is the case with every device, iPad users are no strangers when it comes to bugs and issues. That being said, iPad users are now reporting (1,2,3) that PDF markup or annotation notes are disappearing or not saving when using Apple Pencil.

The bug seems to be affecting several apps such as the default PDF Viewer on iOS, Apple Notes, and the Files app amongst many others.

I am a law student and bought my iPad to read/take notes on PDFs using my Apple Pencil. Occasionally, all of the markups I’ve done on a PDF will disappear. Hours of notes will seemingly vanish out of nowhere with no way of recovery. It’s super frustrating and honestly shocking how such a bug (as well as a few other minor issues) could exist on my brand new iPad Pro. I would greatly appreciate support to resolve this issue. I say respectfully that this $1000+ tablet I bought 2 months ago is unreliable at the fairly basic task I bought it for.
(Source)

Hi. I have been using my Apple Pencil to mark-up PDFs on my iPad Pro. Never had an issue until yesterday. Now, when I save or email the PDF, the mark-ups disappear. Have updated to latest IOS 15.3 but that didn’t fix the problem. Normally, I would open the pdf from email, do the mark-ups, hit “Done” and “Reply All”. When that didn’t work yesterday, I tried saving the marked-up PDF to Dropbox and Cloud Drive but same problem. The first page saves, but the mark-ups disappear from the following pages. Any ideas how to fix?
(Source)

As it turns out, the issue is not limited to native Apple apps since iOS users using Google Classroom complained about a similar issue back in 2019.

A Gold Product Expert explained that the issue surfaced because whenever iPad users use the Apple Pencil, it essentially opens a preview PDF of the file.

When users click on the Pencil, they are not editing the file itself but are writing on an overlay. If you want to edit the actual file itself, you will have to use the square with a diagonal arrow on the top right corner. Doing this will open the original file and allow you to edit it.

Unfortunately, the tech giant is yet to say anything about the issue where iPad PDF markups or annotation notes are disappearing when using Apple Pencil.

Nonetheless, we will be keeping an eye out on the matter and update this space as and when we come across more information so stay tuned. 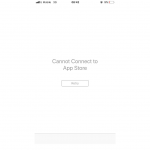 [Updated] App Store down and not working? Some users cannot connect to App Store

[Updated] YouTube links from email, PowerPoint & Excel redirect to 'Your browser is up to date' error page, issue escalated