Launched in 2017, Fortnite is one of the few Battle Royale games that has managed to retain its player base. With millions of players worldwide, the game has become a cultural phenomenon.

Combining third-person shooting with construction elements, it is one of the most unique Battle Royales to date. However, frequent updates to the game also make it susceptible to bugs and glitches. Unfortunately, it looks like another issue has surfaced. Fortnite players are now reporting (1,2,3,4,5,6,7,8,9,10) that the Season Bonus Goals milestone is not updating even after completing season quests after the latest update.

Initially many thought that it was a visual bug but it looks like it is not the case. Many said they spent hours trying to complete the challenges and that it is frustrating that the game isn’t updating them anymore.

In case you don’t know, the milestones in Chapter are broken into 20 stages. Every stage offers the chance to gain 8000 XP and upon completing 10 stages, players will be rewarded with an additional 20,000 XP.

You can see in the image below how the Fortnite Season Bonus Goals screen looks like for some.

I completed two of these challenges last match, neither counted towards the weekly bonus. The AR kills quest counted towards the bonus but idk if I got the XP for it considering it’s just been chilling there for two days. #Fortnite #XboxShare
(Source)

Quests/ seasonal challenges.
Is it just me or is anyone else’s seasonal bonus challenges not counting when you complete a quest, did 5 and its still on 49/50 😔😓 maybe I’m trippin but just thought I’d ask here.
(Source)

Thankfully, Fornite Status was quick to acknowledge the fact that this week’s Season Quests were not updating the Season Bonus Goals milestone.

They said that developers were currently investigating the issue but did not share any ETA on when it will be fixed.

We’re investigating reports that this week’s Season Quests are not granting credit to your Season Bonus Goals objective. We’ll provide an update when we have more info.
(Source)

We hope Epic Games soon finds out the reason behind the issue and release a patch as soon as possible so players can continue farming that sweet XP and progress Battle Pass levels.

When they do, we will be updating this space to reflect the same so make sure you stay tuned for more information.

In the meantime, you can check out our dedicated Fortnite bug tracker to see which issues are currently affecting players. Verizon Fios black screen or outage issue on some tv channels gets acknowledged, fix in works 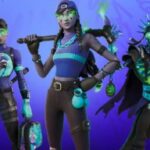