Call of Duty: Vanguard is the latest installment in the long-running franchise. Launched on November 5 this year, it is developed by Sledgehammer Games and published by Activision.

Following in the footsteps of Call of Duty: Warzone, the game does not feature a campaign mode and is instead based on the birth of the special forces that were created in order to combat threats at the very end of the second world war.

But as is the case with recent Call of Duty video games, Vanguard is no stranger to bugs and issues. Moreover, it seems like the infamous Dev Error 5573 has been carried over along with several other issues that surface every once in a while.

Having said that, COD Vanguard players are now reporting (1,2,3,4,5) that they are getting a server snapshot error that kicks them out of the game. Many say that the latest issue is making the game unplayable for them.

As it turns out, many say that the error is shown whenever they are about to win the game or at the end of the round. You can see the error in the image below.

I can predict when I’m about to get kicked from the server. I’m either in 1st place or 2nd place about to get 1st place. And, my team is doing well pushing objectives. It’s like clock work. We are winning and I’m on a solid team willing to play the objectives. I’m getting multi kills like you don’t believe but not enough to get multi streaks. I’m pushing and as soon as we get close to other team in a kill box situation, BAM! Server Snapshot Error.
(Source)

@CallofDuty @SHGames fix this vanguard game. I understand you’re a small company just getting your feet wet, but good lord, it’s like every other match there’s some dumbass issue. Server snapshot, server disconnect or the game freezes during or after a match.
(Source)

Some say that the issue persists since the game launched but now it looks like it is affecting a lot of gamers every other game. Moreover, players say that the error pops up if they are on a kill streak.

They also added that the issue persists only on Blitz mode while others say it is caused whenever they use dead drop during the match. But with Vanguard developers yet to say anything on the matter, it is still unclear when the server snapshot error will be fixed.

When they do, we will update this article to reflect the same so make sure you stay tuned for further updates. In the meantime, you can check out our dedicated COD Vanguard bug tracker to see a list of issues affecting players.

10:56 am (IST): Sledgehammer Games rolled out a new update for Vanguard on December 9 that supposedly addresses the ‘Server snapshot error’ according to the changelog. Here’s a snippet from that: 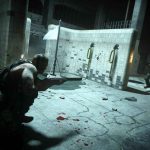