Spotify is one of those music streaming services that many of us have a love-hate relationship with. While users do appreciate the vast library of songs it has to offer, many hate the annoying adverts that ruin the listening experience every few minutes.

As of September 2021, Spotify has more than 381 monthly million users and is available in more than 180 countries. Last year, the company decided to remove the 10,000 songs library limit it had implied to everyone.

Naturally, since it is an online service, some bugs and issues do pop up from time to time such as the recently reported bug where the iOS app would redirect users to Safari browser.

Unfortunately, Spotify users are now reporting a new issue where the lyrics are having a slight overlay due to narrow line spacing. It looks like the issue affects those who use the app in full-screen mode, making the lyrics look cramped and in some cases unreadable.

Spotify subscribers seem to be angry with the company since the issue also results in some words or characters disappearing on the lyrics popup.

However, a few weeks ago I noticed the lines for the lyrics section looks weirdly squeezed together. I used Spotify on both my old and new phone so I remember how the space between the lyrics lines look like. For the record, I didn’t change my new phone’s text size at all ever since I got it. It just seems to weirdly changed some time in the past few weeks. I tried reinstalling the apps and nothing happens. It really bugs me to see the lyrics weirdly squeezed together. Is there anything I can do about it?
(Source)

Lyrics and song titles are cut-off at the top, if their script extends beyond the normal text-box height. This problem is only present in the fullscreen player mode. Refer to the image attached. The characters with the dakuten (ﾞ) and several kanji aren’t displaying properly. Song titles and lyrics with capitalised letters that have diacritics, e.g. É, Â, Ó, do not display the diacritics at all. Please fix this immediately.
(Source)

Fortunately, it looks like the developers at Spotify are aware of the lyrics issue and say that it is mostly affecting non-English languages.

We’re seeing reports that the top of some characters are cut off in the Lyrics feature due to the narrow line spacing. This is mostly affecting non-English languages. At the moment, this is being investigated.
(Source)

In the meantime, we will keep an eye on the matter and update this space when Spotify releases a fix for the lyrics issue.

05:30 pm (IST): Spotify has fixed the issue with lyrics having slight overlay according to the latest status update by a mod on the community.

Hey folks,
Thanks for your patience while we looked into this issue. We’re happy to say that this should now be fixed for everyone! Just make sure your app is updated to the latest version. If this version isn’t available yet for you, rest assured that a fix is on the way so please keep the app up-to-date. (Source) 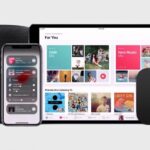