The successful FPS Far Cry 6 is experiencing some issues on its story mode and its inner store.

According to recent reports, there is a bug in the Paradise Lost mission that does not allow it to be completed. Also, the Black Market is not refreshing (and appears empty to many).

Some Far Cry 6 players are reporting problems related to the Paradise Lost mission. Apparently, the game progress system is broken there (1, 2, 3, 4).

Alright, so I was walking around conquering bases and was nearby Paradise Lost, a main mission. I went on my map and fast traveled to an outpost but somehow it bugged and launched my mission. Now I’m in the outpost and it keeps saying “Return To Mission Objective” but since I’m too far I fail the mission instantly. I tried abandoning mission, but it keeps teleporting me back to the outpost with the alert still there. Any ideas on how to fix this? Do I have to restart my progress?
Source

I’m on the mission Paradise Lost and I’m stuck on the part where it says to escape the hotel. I’ve already lost all heat from the FND and made it as far Aguas Lindas but it won’t progress. I’m currently stuck in this limbo zone where the game won’t progress any further and I can’t do any new missions because it says I still have to escape. What should I do? I’ve already tried restarting the game, reloading the autosave, and doing an entire outpost.
Source

Basically, the reports indicate that the game would not be tracking well the progress of the objectives. Therefore, it would not be possible to continue towards another mission.

Black Market not refreshing or empty

Normally, the Black Market refreshes on a weekly basis, and has an hour meter indicating how much time is left. However, this counter is reportedly broken.

The affected players report that the hour counter for the refresh appears with negative numbers (like ’00: -54: -23 hours’).

@UbisoftSupport
so I’m currently almost -24 hours until my next black market reset. When is this going to get patched?
Source

This means that Black Market will not receive new items until the issue is resolved. Also, this causes the market to appear empty for many.

Ubisoft is aware of both issues

Currently, Ubisoft is already aware of both bugs and working on a solution. However, there is still no estimated date for the arrival of the fix.

In the coming days, if there is any new development in this regard, we will update this article, so stay tuned with us.

IST 12:54 pm: A user has since come out to share a workaround that worked for them. Below is an excerpt of the same.

[Update: Dec. 07] Unlocked Verizon Pixel 6 Pro and Pixel 6 units not getting OTA update? Here's what you need to do 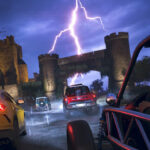