Online privacy has never been more important than now due to the various risks bank fraud or identity fraud. Hence many smartphone vendors, such as Apple, have stepped up their game when it comes to privacy.

However, this boost in security has also has its fair share of drawbacks. For starters, it makes it nearly impossible to get into an iPad or iPhone that has an iCloud activation lock when you don’t have the Apple ID or password.

There may be several situations where you might need to unlock or remove the iCloud activation lock on your iOS device such as unknowingly purchasing a locked iPad or iPhone, activation lock appearing after a reset, or getting stuck with a locked device after a malicious attack. Individuals who have access to the Apple ID and password can gain access to the phone without any hassle, however, for users in the other camp, things get tricky.

And without the right tools, it’s impossible to get into the phone. Lucky for you, that’s where we introduce AnyUnlock – iCloud Activation Unlocker.

This nifty tool is available on Windows and Mac and has been developed by iMobie to help iPad and iPhone users to remove the iCloud activation lock without a password.

Before jumping to the steps to bypass the iCloud activation lock, we’d like to touch upon the supported devices. iMobie confirms that the tool supports devices with iOS 12.3 and above (iOS12.4.5 & 12.4.6 excluded).

That said, here’s how you can remove the iCloud activation lock on an iPad, iPhone, or iPod touch using the tool:

Note: If you don’t have iTunes installed on your computer, we’d suggest installing and setting it up before proceeding. If not, the tool will guide you through the installation process itself.

Step 1: Download and install AnyUnlock – iCloud Activation Unlocker on your Windows or Mac computer. The setup process requires only a few clicks and takes less than a minute. Step 2: Connect your iPad or any other supported iOS device to your computer via the USB cable and then launch AnyUnlock – iCloud Activation Unlocker. When ready, click on ‘Start’. Step 3: You’ll be greeted with a screen that warns you about the side-effects of Jailbreaking your iOS device which is a requirement to bypass the iCloud activation lock. To continue, check the ‘I have read and agree to Terms of Use’ option and then click the ‘Start Jailbreak’ button. The tool will begin downloading the necessary Jailbreak files in order to get your iOS device jailbroken. When downloaded, your phone should automatically enter the DFU (Device Firmware Update) mode. If it does not, simply follow the instructions by AnyUnlock – iCloud Activation Unlocker. When the device enters DFU mode, the tool will automatically kick-start the jailbreaking process that will take a few minutes. 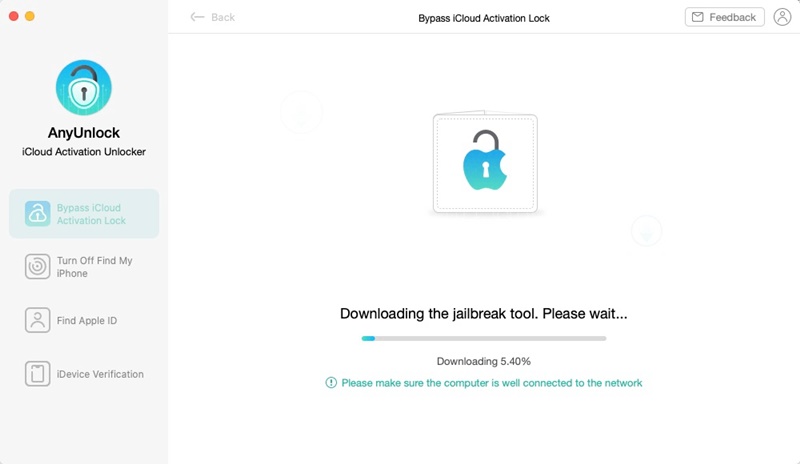 Step 4: Once the device has been jailbroken, the tool will have a screen that will show you the information of your device and it will have a button saying ‘Bypass Now’, click on it to go ahead. When the process begins, DO NOT disconnect your iPad, iPhone, or iPod touch from the computer and do not close the tool. Restarting your device will also lead to the process failing.

Voila, if you followed the steps above, you’ll see the following interface once the tool bypasses the iCloud activation lock: You will now be able to use the iOS device without many hiccups. But the things to note are that due to the device being Jailbroken, you won’t be able to make phone calls, use cellular data, FaceTime, or iMessage.

Further, you will be unable to log into iCloud with a new Apple ID from Settings on your device and you will also be unable to connect to the device via iTunes.

AnyUnlock also has a feature called Turn Off Find My iPhone/iPad/iPod touch without password. This is helpful if your device is running iOS 13 or iOS 14 and above and is any of the following — iPhone 6s to iPhone X, iPad 6 to iPad 8, and iPod touch 6 to iPod touch 7.

The feature will help you unlock the device and also let you access all features as if it was never locked.

AnyUnlock – iCloud Activation Unlocker can be downloaded for free, however, you do need to pay to unlock most features. Luckily, iMobie offers some crazy good plans that will suit the needs for every type of user.

Here are the current prices based on the plan period:

If you ask us, the Lifetime plan seems to be the best deal. But we’ll leave you to choose your plan based on your own situation. All the plans are reasonable priced considering you’re getting access to a device that may cost up to 10x the price of these plans.

Taking your iPhone to a local service center to have them unlock or remove the iCloud activation lock on your iPad, iPhone, or iPod touch may set you back a lot of money which is why it’s not feasible for many.

That’s why recommending AnyUnlock by iMobie to remove the iCloud activation lock on an iPad or any iOS device for that matter is easy. Of course, you lose certain features but they’re absolutely worth the tradeoff considering the fact that the alternative leaves you without access to the device.

Disclaimer: This is a sponsored post, made possible in association with iMobie. PiunikaWeb doesn’t take any responsibility of the product being advertised here.

About iMobie: iMobie is a software company that aims to help the iOS & Android users to fully enjoy digital life with ultra simplicity. The company has several tools to serve the purpose of data recovery, data transfer and management, as well as device unlock and repairing.