Destiny 2 is a popular free-to-play multiplayer game developed and published by Bungie. It is available on numerous platforms with a pretty decent player base.

However, Destiny 2 players have been facing some problems lately. Among them, freezing or crashing, Magnificent Solstice armor downgrade, and more issues. Now, a couple of new problems have come to light where Destiny 2 players are unable to complete the Ascendant Ballast I challenge and Tracing the Stars quest.

As per multiple reports, the Ascendant Ballast I challenge and Tracing the Stars quest in Destiny 2 are bugged.

Reports outline that the Ascendant Ballast I challenge does not properly track if Wayfinding Runes are picked up in Shattered Realm.

Is anybody else’s seasonal challenges not tracking correctly, specifically ascendant ballast I and umbral way finder I?
Source

Ascendant ballast 1 wont complete for me i collected all the anchors and it reset and im now stuck at 8/10. just wanted to know if this issues is known or if theres a workaround?
Source

On the other hand, the in-game progression does not count towards the Tracing the Stars quest in Destiny 2.

These problems are inconveniencing Destiny 2 players as they are unable to progress in the game because of the bugged Ascendant Ballast I challenge and Tracing the Stars quest.

For some reason the atlas skews are not appearing for me. I have the correct quest and I’m on the right step. I was able to do this earlier with my warlock but when I’m on my Titan or Hunter when I go to the correct locations there’s nothing to gather… the skews aren’t there. Is anyone one else having this issue? Am I missing something?
Source

However, Bungie Help has acknowledged both issues in their Season of the Lost issues and information thread on Twitter.

While both issues are under investigation, Bungie Help has provided a workaround to complete the bugged Ascendant Ballast I weekly challenge in Destiny 2.

Support has asked players to collect Waterwheel Rune first in order to finish the weekly challenge for this week.

❖ Progression toward the Tracing the Stars quest doesn’t count if players pick up Atlas Skews before they pick up the quest, or if they pick up Skews on another character.
Source

Hopefully, Bungie fixes both problems soon so that players can progress in Destiny 2 without any hassle.

It looks like Bungie has finally fixed the Ascendant Ballast Challenge not tracking issue. The developers say that already picked up Anchors might not be counted until the second week.

The Tracing the Stars issue is now also set to get fixed really soon. For more details about it and a bunch of upcoming fixes, head here. 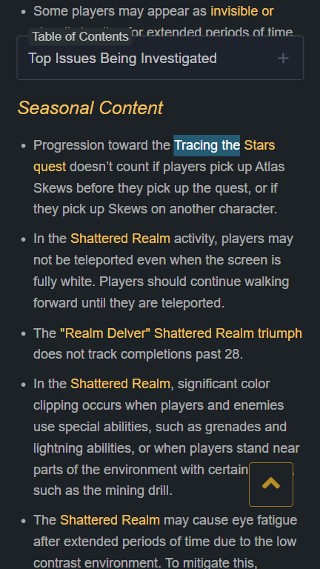 Bungie claimed that it has fixed a bug on Destiny 2, but before you get excited, the fix is to resolve an issue where Tier 3 Focused Umbral Engrams had no weekly limit, not for the bugged Tracing the Stars quest.

We have issued a server side fix to resolve an issue where Tier 3 Focused Umbral Engrams had no weekly limit. (Source)