[Update: Poll results] New Discord Threads feature: Do you like it, wish to disable, or want better permissions for management at server-end?

The Discord threads feature was announced earlier this year and was finally released yesterday for all to enjoy. The feature aims to make conversations in bustling servers easier to understand.

With this, any server with community features enabled will be able to transform messages into threaded conversations across mobile and desktop.

A thread can be created by channel members by selecting a new hashtag symbol that shows in the context menu that pops up when hovering over messages. You can also press the plus sign in the chat bar and select “create thread.”

Such threads will be labeled with a subject name, making it easier to continue a discussion about any off-topic idea into a conversation of its own.

But even with all of its benefits and good intentions, the feature hasn’t really gone down well with everyone. There have been plenty of objections from users, particularly from Discord mods and server owners.

new thread feature is very easy to abuse. i have done some testing, and not only can someone who has been blocked by you create a thread on your message, but that message can be seen by you without having to click it.
Source

How to disable threads early on a community server? I know we can *enable* them early, but how do I make it so they aren’t automatically enabled later on?
Source

Those who dislike the feature argue that the threads transform the nature of a server from a chatroom to a forum. These users also argue that there is now a greater chance of randoms flooding a Discord server.

Similarly, Discord server admins and mods say that they will be having quite a hard time keeping checks on each and every thread thus opening a crack for abuse and spam.

FYI, you can disable them by looking it up on Settings as shown below. 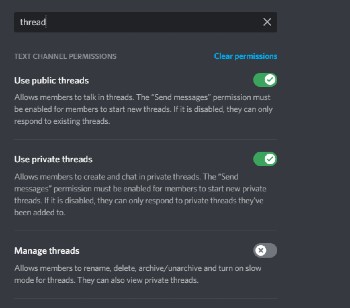 But even with all of the hate, there are plenty that are actually fans of the feature. Why? Well, because it’s cool and allows off-topic conversations.

So what’s your take on all of this? Do you like the new Threads feature on Discord? Or have you already disabled it? Or are you one of those that are cool with it but just wish to see some improvements including better permissions for management at server-end?

Let us know your opinion by voting in the poll below. You are also free to drop a comment in the comments section at the bottom.

Are you digging the new Discord Threads feature? Or do you wish to see more improvements especially when it comes to permissions?

Vote below and read our coverage here: https://t.co/ARfvNejcw6#Discord #Threads

As always, the poll results will be out next week.

There are 3 permissions to help fine-tune which members can create threads and which channels Threads can be made in.

1. Use Public Threads: Threads creation will be open for all
2. Use Private Threads: Only specific members can create or chat
3. Manage Threads: Members are allowed to manage Threads limitlessly

If unchanged, Threads will inherit permissions from the channel in which they’re created. Thread creation is also controlled by 2 permissions – users need both “Send Messages” and “Use Public Threads” permissions to create threads.

But to send a message, users only need one of the above permissions. For a more detailed guide, head over to this official support article. 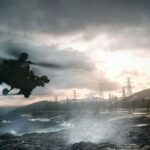 [Updated: Aug 06] Battlefield 4 servers down or not connecting on Xbox, as per multiple user reports