SiriusXM Satellite Radio is a subscription service that offers a larger variety of programs than traditional radio along with clearer reception.

Tesla Model S and Model X cars have access to it through XM-dedicated hardware. It is a premium feature that’s not available on the Model 3 or Y.

Fans of the network that do not own a Model S and Model X are forced to purchase an additional unit and hook it up via the AUX or stream audio from their phones, which isn’t exactly ideal.

But for Tesla Model S and X owners, listening to SiriusXM radio is as simple as tapping the SiriusXM app in the ‘Music’ section on the touchscreen. Or at least was.

You see, following the update 2020.48.37.6 on the Tesla Model S, the S/XM app has just straight-up vanished from the OS and isn’t listed as a source option anymore, as if it never existed in the first place.

@Tesla and @elonmusk : SiriusXM disappeared for a large chunk of your customers with the latest Software release. Since you seemingly put your weakest Software Engineers on your Entertainment system, how about hiring just ONE professional DevTest person for it?
Source

Well, @Tesla pushed an update to our 2014 Model S, and now we can’t listen to @SIRIUSXM in the car. @SIRIUSXM’s website is a nightmare, but I was able to speak to a person at customer care who very efficiently helped me cancel out the account.
Too bad, though, I really liked Sirius.
Source

And no, the problem is not some temporary thing as the SiriusXM app refuses to return even after performing multiple reports.

Oddly, the Tesla Model S is the only affected model as we are yet to come across any reports from Model X owners about the same. Affected model years include the latest, all the way back to 2013.

While most owners seem to think it’s Tesla that’s behind the issue, a fresh acknowledgment from SiriusXM indicates otherwise.

The satellite radio service says that they are aware that the SiriusXM app has gone missing on the Tesla Model S and are currently working on a fix. 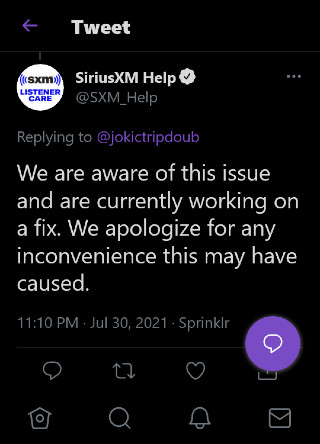 Thus, for now, there really isn’t anything to do other than waiting for it to get resolved. You can try using the SiriusXM mobile app as an alternative in the meantime.