Allocating new spectrum has become a mandatory requirement for the mobile network industry to improve capacity and enhance mobile broadband.

And Verizon has been doing just that recently. The carrier had recently acquired the C-band spectrum following which it commenced the installation of C-band equipment from Ericsson and Samsung Electronics.

Verizon has also been quite busy trying to improve their 5G coverage. The carrier had announced yesterday the successful deployment of their 5G Ultra Wideband in 14 additional arenas and stadiums.

However, even with all this progress, there are still plenty of complaints doing rounds about network drops and slow mobile data: Verizon signal has been horrible this spring. They definitely made changes to the network, for the worse.
Source

This may even happen when the phone is showing maximum 5G network strength, and is also affecting calls. Switching to the 4G LTE network isn’t of much help either as the network issues persist.

Several users have also complained saying that the state of Verizon’s mobile network wasn’t always like this and has recently worsened. Although it is highly likely that the pandemic is to be blamed for that. Nonetheless, if you are one of the users facing these network problems with Verizon, then you would be pleased to know that they have been acknowledged.

Verizon Support recently responded to a complaint on Twitter saying that the mobile network is indeed experiencing issues in parts of Texas.

Their technicians are aware and already on top of it, working to resolve it as soon as possible. 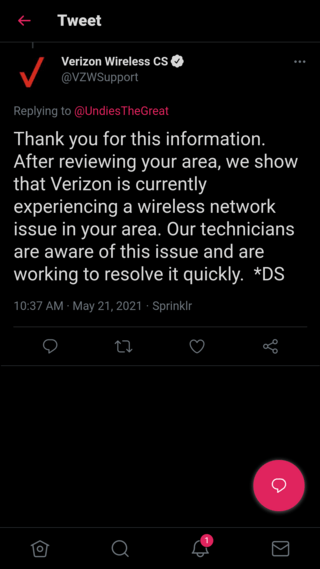 If you are facing a similar issue in some other location in the United States, then your best bet would be to raise a complaint about the same on Twitter just like the user above did.

If all goes well, Verizon should acknowledge your case of network issues as well. For now, we will continue tracking the matter so stay tuned to PiunikaWeb.

02:57 pm (IST): Verizon is currently experiencing an outage in some regions in the US as per the carrier’s official Twitter handle: The issue is being worked upon though so it should be resolved soon.

02:13 pm (IST): Verizon is currently suffering another outage and Verizon Wireless CS has acknowledged the issue on Twitter.

Verizon is currently experiencing a network outage. Our technicians are aware of the issue and are working to resolve it quickly. We apologize for any inconvenience. *BXA
Source

04:18 pm (IST): It seems that Verizon customers aren’t they only ones facing issues with 5G as hundreds of users in Korea have also filed a report against telecoms over disappointing quality on the new networks as per a report.

We can only hope that carriers around the world continue to improve upon their networks to offer better support and speeds.

Going by the information shared by a user, resetting the Settings may help (as can be seen in the image below). It appears that Verizon customers in Westchester, NY are experiencing connectivity issues and the company has confirmed that they’re working on a fix for it.

Thank you for being proactive with your service location. Verizon is currently experiencing a wireless network issue in your area. Our technicians are aware of this issue and are working to resolve it quickly. We do apologize for any inconvenience this has caused. (Source)

In a recent press release, Verizon boasted that it remains unmatched for overall network performance and reliability. It also apparently was able to achieve median speeds of 40 Mbps in 43 markets.

However, reports of the carrier offering poor 4G/5G speeds continue to pop up on Twitter, Reddit, and other social media platforms. Verizon Wireless support is asking users to login to the My Verizon application to be informed when there’s a service outage in their area. In case you haven’t done this already, we’d suggest doing so to know when there are widespread issues with the network.

To find out if you’re affected by a Verizon mobile network outage, sign in to My Verizon. If we’re aware of a network outage in your area, you’ll see a Network Notification alert at the top of your screen. (Source)

In a fresh press release, Verizon revealed that with Samsung’s help, the two companies have completed a fully virtualized 5G data session on C-band spectrum in a live network environment.

This success will help in scaling the company’s 5G infrastructure and offering users a better 5G network experience.