There have been many speculations about Samsung’s much anticipated custom skin and OS update i.e. One UI 4.0 based on Android 12.

It was reported earlier that Samsung might start the One UI 4.0 (Android 12) beta testing for the eligible Galaxy S series devices in July 2021. 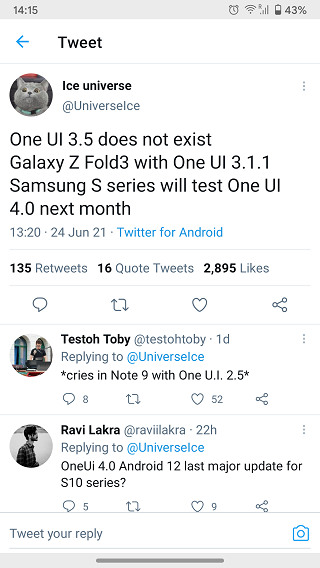 However, later reports from early July 2021 indicated that Samsung had delayed the One UI 4.0 announcement.

Now, it seems that the wait has finally come to an end as the OEM might finally reveal its Android 12-based custom skin, One UI 4.0, soon.

As per a recent report from the Samsung community, the One UI 4.0 (Android 12) beta update for the Galaxy S21 series is coming soon.

While no release date has been provided regarding the beta update, the info is quite credible as it comes directly from Community Manager.

Also, Samsung will notify users of the Galaxy S21, Galaxy S21 Plus, and Galaxy S21 Ultra when the beta program goes live via the Members app.

Thus, those interested in testing the latest OS update and custom skin from the OEM should keep a weather eye on the Members app.

It is possible that the Android 12 (One UI 4.0) beta program might only go live for the Korean variants from the Galaxy S21 series for the time being.

However, this is still based on speculation as the Galaxy S21 series One UI 4.0 (Android 12) beta banner shared by the Community Manager does not shed light on much details.

It is still good to see that Samsung is gearing up for the Android 12 update and has finally made matters regarding the same official.

That said, we will keep tracking this for further development and will report back when new details become available.

Soon after we broke the news regarding the beta operation manager’s post about One UI 4.0 coming soon for the S21 series, it was removed. This leads us to belive that it was posted accidentally, however, folks can still expect the update to arrive soon. Fitbit working to fix Charge 4 issue with sleep score not showing for some users, potential workaround inside