Rust is a favorite pick among player communities for being the multiplayer-only survival video game.

The game is easily available on all major gaming platforms and the best part about this is the players are not bounded by any rules. It is all about survival. 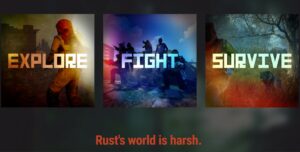 It isn’t that the game never runs into bugs and glitches but recently, things have gone worse for Rust players.

We are seeing an influx of reports that Rust is freezing and crashing on multiple gaming platforms for many users. Here’s how they describe this issue.

if anyone was wanting to buy this game and have a fun gaming experience, don’t bother you will lag out every 5 minutes if you’re even able to load in without crashing that is.

When will these sudden crashes be fixed on the next gen consoles, kinda bs they crashing left and right appreciate the hard work nun the less

This glitch led consoles to temporarily lock up for a couple of seconds, resulting in a rather unfair death or often being kicked out from the server.

Rust Console Edition support, however, did intervene with a patch to fix the game freezing and crashing issue and announced it here for both Xbox and PlayStation. For Xbox, the patch version is 1.03.1 and for PlayStation, it is 1.03.

For once, everyone thought the fuss had finally come to an end with the patch but later realized that the fix did no good to the game.

Twitter and other social media channels were flooded by reports of Rust crashing and freezing even after the bug fix.

The game had its servers down in the beginning which was fixed to some extent after the fix but the crashing issue persists for a big chunk of players.

This issue leaves no one out of the radar as both Xbox and PlayStation users are affected which Rust customer support was initially reluctant to acknowledge.

Famous Down Detector also confirms that there’s actually an outage going on in the game.

This needs immediate attention and we believe Rust already has an idea about what is going on and they must be exploring options at this moment.

The first fix came early and we expect the second one to roll out soon. That said, we will continue to keep an eye on this one and update you as soon as we have more information.

IST 01:40 pm: There are a few workarounds that seem to work for a few users and are worth a try.

Workaround 1: Turning off the HUD in the title menu

This avoids the blue screen from appearing on the login screen and is working for PS4 as of now.

Workaround 2: Do not leave a sleeper on the server

Make sure to drop your kits into the lockers and suicide to leave the server. This will ensure you are able to join the game. If a friend faces this, kill his character in the sleeper.

We will let you know in case a fix or more workarounds pop up.

IST 01:40 pm: Looks like waiting for an update is the only alternative for the players, as even the official support page for crash issues suggests updates as the only way out.

Here’s a user-shared video on how to fix the crashing issue. You may give the workarounds shared by them a try.

An individual has shared a video detailing a few steps that users can take to fix the crashing or freezing issues with Rust on consoles. This involves tweaking a few settings in the game.

It’s been more than a week, and keeping their quiet, Rust Console hasn’t yet given any status update on the game crashing issue. The wait continues to trouble those who aren’t able to play the game because of random crashes.

Rust console has now spoken saying the patch 1.03 should be going live today for the PlayStation players. But, sadly it doesn’t address the Xbox crash issues. They’ll rather be addressed in update 1.03.2.

Here are what they said:

Patch 1.03 should be live later today for our PlayStation players. On top of what we have already announced in the patch notes we also tackled a lot of the crashes, so this will improve the overall game stability!

While responding to a user inquiring about the crashes on Xbox, they further added:

It should be solved with the 1.03.2 hotfix that will come soon for Xbox.

Looks like the latest update made things better at least on the PS. That’s what a user-conducted Twitter poll conveys.

How stable is Rust Console Edition on the PS family of consoles after 1.03.

Incoming is the latest status update on the matter. Players should expect some improvements.

Happy Monday everyone! The hotfix patch should go live later today for Xbox. Hopefully this will improve your gameplay experience and we aim to fix more of the crashes affecting Xbox users. Have a great day!

An option update has been released for Rust with several improvements and bug fixes but players are still facing the freezing issues after the same. However, support has said that some remaining issues are being investigated.