Roku last week removed the YouTube TV app from the Roku channel store over a dispute on distribution terms for the core YouTube app. Or at least for new users since existing YouTube TV subscribers can continue accessing the service.

However, according to recent reports, YouTube TV is now inaccessible from the YouTube app as well. There are also a few reports saying that the YouTube app isn’t working at all. @YouTubeTV YouTubeTV isn’t available on the YouTube app on Roku. Is this a known problem or is something not working?
Source

Why aren’t @Youtube and @YouTubeTV working on my Roku? Last I knew we were safe. What’s the deal? Am I going to have to go through a different streaming service now? I’m not purchasing another streaming device. BS.
Source

And as if that’s not enough, there are also several complaints saying that the YouTube app on Roku TV isn’t working at all.

Has Roku now began to block the YouTube app from its platform entirely now? Seems unlikely at this point. But what we do know is that the issue is a known one: We’ve seen similar reports about unable to access the YouTube main app on Roku devices and our team is currently looking into it. We don’t have an ETA on how long it’ll take to get fixed, but we’ll keep you guys posted.
Source

Yep, YouTube is aware of the issue and is already working on a fix. An ETA wasn’t provided though. For now, there is a possible workaround available that may be of help to you.

Instead of trying to use the YouTube TV directly from Roku or through the YouTube app, you can instead try casting it from the phone as a Redditor has suggested:

I found a workaround. You can cast from your phone and access YTTV that way using your Roku remote.
Source

Hopefully, Google and Roku will pull their socks up and sort this mess out as soon as possible. We will continue tracking the YouTube TV not working on Roku issue in the meantime so stay tuned to our dedicated YouTube bug tracker.

Responding to a user’s complaint regarding the issue, TeamYouTube — on Twitter — claimed that they’re rolling out a fix for the YouTube TV issue on Roku devices. 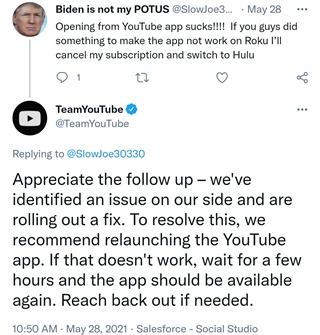 In case you are still facing the problem, here’s what Team YouTube is suggesting to complainants on Twitter:

We recommend updating the firmware of your Roku (if available) and restarting it. In case that the YouTube TV app still isn’t working, our live support team can look into this further. Here’s how to contact them: https://t.co/bCEAloM1wo?amp=1
Source

Meanwhile, we also stumbled upon a response from Roku Support on Twitter wherein the company is advising against removing the app.

At this time, YouTube TV is still available on the Roku platform. Note that you should not remove the channel if its already installed and if you plan to use it. New installations and reinstallations will not be possible at this time
Source

Going by one of the recent reports, YouTube TV app may big adieu to Roku in the days to come. Here’s what a Roku spokesperson said while accusing Google of anti-competitive demands:

Google is attempting to use its YouTube monopoly position to force Roku into accepting predatory, anti-competitive and discriminatory terms that will directly harm Roku and our users

It should come as no surprise that Google is now demanding unfair and anti-competitive terms that harm Roku’s users.

A Google spokesperson on the other hand said:

We have been working with Roku in good faith to reach an agreement that benefits our viewers and their customers. Unfortunately, Roku often engages in these types of tactics in their negotiations. We’re disappointed that they chose to make baseless claims while we continue our ongoing negotiations

All of our work with them has been focused on ensuring a high quality and consistent experience for our viewers. We have made no requests to access user data or interfere with search results. We hope we can resolve this for the sake of our mutual users.

The issue doesn’t appear to be settling as of now.

Jumping in – our new agreement with Roku comes with a new feature that lets you open YouTube TV from within the YouTube main app on Roku devices: https://yt.be/help/ny45i. We’ve already started rolling this out to members and hope to complete it soon.

This could be why some of you are not able to access it.

Recent reports on Twitter convey, either the glitch wasn’t resolved for all, or it’s back again. What’s good is YouTube support has confirmed the app not working on Roku devices problem. Here’s what they said:

We’re aware of the YT app not working on Roku devices, and we’ve passed this along to our team. In the meantime, we recommend sharing this via our feedback tool (using the link we previously shared) so they can collect and investigate the issue. Appreciate your patience.

YouTube support is suggesting users to ensure their Roku device is running the latest firmware.

Jumping in – make sure you have the latest version of Roku’s firmware. Also, restarting the device can help fix this issue. Hope that does the trick.

While team YouTube continues to say, they’re looking into the matter, ICYMI, “Can’t run channel” is the notification that Roku TV users encounter (as can be seen in the user-shared image below). 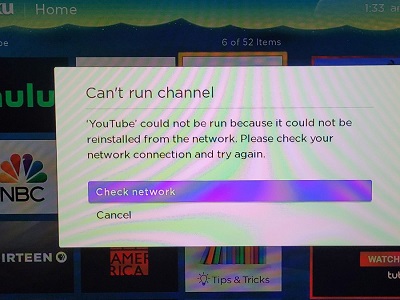 It seems that a Roku TV user has found a way to fix the ongoing issue with the YouTube app. The workaround involves deleting the YouTube app then adding it back. So, be sure to give it a try and let us know if it works by dropping a comment below.

Reinstalling the app is often a troubleshooting step, which if followed by YouTube users facing issues on Roku will not let them install the app again.

The information came from the YouTube team on Twitter. Here’s what they told a user who wasn’t able to re-install the application after deleting:

Contrary to YouTube support, a Roku employee are suggesting the complainants to try the basic troubleshooting step which invloves deleting the channel, then updating Roku, and then adding the channel again.

Here’s what they say:

For troubleshooting, try to remove the channel, update the Roku device by going to Settings > System > System update > Check now, restart your Roku device, and add back the channel.

While the workaround appears to help some, going by the reports, it doesn’t resolve the issue for all.

While the issue is being looked into (as we mentioned earlier), YouTube support is now suggesting the affected users to try the troubleshooting steps listed here.

Going the information coming from users as well as Team YouTube, hard reset (unplugging TV/Roku and restarting the unit) or hard reboot could be of help.

So you can give this workaround a try. Factory resetting the device (by heading to Settings>System>Advanced system settings) is yet another alternative.

ICYMI, following the Roku dispute, Google is now offering select YouTube TV subscribers a free TiVo Stream 4K, or Chromecast with Google TV. But not all will be getting the free subscription.

YouTube TV is now offering customers a free Google Chromecast or TiVo device. There’s not a date set for YouTube TV’s 4K offering, but users would be able to download 4K content to their DVR for offline viewing.

Users can also add unlimited concurrent streams while at home which is a huge jump over the previous cap of three.

As a result of the above offer and the entirety of the skirmish, Roku has now slipped 6.5% in NASDAQ:ROKU.

YouTube is now asking users to restart their Roku devices and reinstall the YouTube app in order to fix the problem. Unfortunately, this does not seem to do the trick.

Moreover, TeamYouTube, via Twitter, is yet to share an ETA for the fix which has left many users disappointed. One of the users on the Roku community has listed some of the workarounds that should be given a try:

Reinstallation of the app doesn’t seem to be helping for long as the app reportedly works only for a day or two. As for YouTube, they still maintain that YouTube and the app not working on Roku issue is being worked on.

While some support agents are saying the team is looking into the matter, others are still suggesting troubleshooting measures like updating the browser, clearing the cache and cookie, and re-installing the update to see if that helps.