Destiny 2 (aka Destiny 2: New Light) is a first-person shooter game that enjoyed praise from the gamers fraternity for having a robust story.

The game is free to play and is easily available on all platforms including the newly launched PlayStation 5.

The game recently saw a hotfix that addressed some undeclared bugs and brought improvements to the gameplay. But looks like not everything is in perfect shape. An error code “Beagle” appears while playing Destiny 2 that crashes the whole game on PlayStation 5. Here’s what the players have observed.

I just got Error Code “Beagle” which means I had to delete and reinstall Destiny 2 from my PS5. Four of my clan mates on PS5 have gotten the same error in the past two days. One guy has gotten the code twice. No don’t had this experience before Tuesday’s hot fix.

I encountered since the last update Error Code Beagle. It says “unreadable Game Content. A Full Destiny 2 Version is required.

What’s more frustrating is that even if the error prompts you to reinstall the game, it does no good after that. The error consistently pops up every time the game is launched.

Some users even claim that it works fine with PlayStation 4 and it is only the PlayStation 5 that has been affected.

Other games in the console run smoothly as they should so it’s definitely not Sony.

And since all the reports are from a couple of hours ago, it can be directly linked to the recent hotfix that was applied to the game by Bungie. 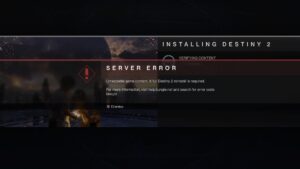 If that’s the case, the hotfix didn’t quite live up to its name and needs immediate attention or the game will be no longer playable.

The company is yet to come across the reports but with such increasing reports, it shouldn’t take long.

Till then, all you can do is uninstall the game and reinstall it. This fixes the bug for some time but there are reports where players faced it even after that, forcing them to repeat reinstallation.

If it was to happen once, things would have been fine but this just keeps repeating and it is practically not possible to keep reinstalling a 75GB game on PlayStation 5.

But here’s something that a player tried and it worked for him.

You either need a spare character slot, or a character you are prepared to delete.

Load up game. Delete unwanted toon, or create new one. After that, select it. Skip all the cut scenes and it spawns you in on earth. Go to options, change character, select preferred character, bang, goes straight in everytime. No crash to dashboard.

Only thing is, you’ll need to do this everytime you load destiny 2. At least I do, else I get that error code and crash to dashboard every single time. (Source)

Things really need to be patched up soon. We hope Bungie quickly takes note of it and releases a fix in time. That said, we will keep tracking this and keep you guys posted with further developments.

Another user-shared workaround has come to our sight that may help. Here’s how the user puts it:

Moving the Destiny 2 data from internal ssd to a external hdd and back again solved this problem for me without having to download the 70GB again.

IST 06:40 pm: Destiny 1 and 2 players in Europe are still facing error code beagle and other error codes including cabbage, coconut, and currant. Bungie has now acknowledged this issue, however, but there is no mention of a fix in the acknowledgement.

We’re aware of Destiny 1 and Destiny 2 players in the EU region experiencing error codes including, but not limited to, CABBAGE, CURRANT, and COCONUT errors. Please stand by for updates.
Source