Regiments in Call of Duty Warzone allow players to team up together and play a multitude of competitive game types against other Regiments. You can call them clans of sorts.

They are pretty much essential if you’re spending any sort of time playing Call of Duty Modern Warfare online. Creating one is pretty simple too.

However, Regiments aren’t working as expected for several CoD players. There have been a bunch of complaints making rounds. Users report that they’re unable to invite friends who are online because they show offline. Are regiments broken? Trying to add squad mates to regiment at the moment and invites not going through.
Source

You still need to fix Dev errors for all the Xbox players on MW MP and a fix for the Regiment system which has broken since the Warzone event. Currently unable to send or receive Regiment invites or revoke ones already sent. Please look into this.
Source

This has seemingly started since the last CoD Warzone update. As a result, the Regiments function has been virtually rendered useless on CoD. After all, what good is it if one can’t invite squadmates over?

Nonetheless, if you are one of the players for whom the Regiment invites are not working, then you will be pleased to know that Raven Software is already looking into the matter. 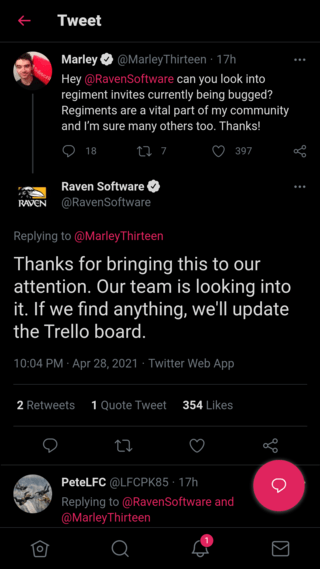 But as it stands, there is no trace of the Regiment invites not working issue anywhere on the official Call of Duty Warzone Trello Board. Still, we are hopeful that the bug will get resolved soon.

As if the above issue isn’t much of a problem already, several players are reporting that the friend list on Call of Duty Warzone is also not working or takes an extremely long time to load. Moreover, users have tried workarounds like deleting the game cache or restarting the entire thing to no avail.

While there hasn’t been a separate acknowledgment for this one, it is highly likely that it is related to the Call of Duty Warzone Regiments issue. Hence, they should both vanish at the same time when a fix is made available.

While the devs take a look at the issue, you can crosscheck if you have the correct settings enabled to be able to send/receive the invites.

Head to the Options menu and look for the Account Settings (on the right), and make sure Cross play and Crosssplay communications are enabled.

Next, you should check if your connection is eligible to play with others. For that, in the Account Settings look for a little box that contains all the information about your network settings. Make sure NAT is either operate or moderate. If it’s closed, contact your ISP.

After that, go to the Friends/Social menu (by using the triangle or Y button), open the Manage Friends tab, enter your friend’s Activision ID and search. Close the keyboard, then press the X or A button to send a friend request directly. If an error pops up, reboot the console, that should help.

As a status update on the matter, the issue is still being looked into.

As it currently stands, the Regiments invitation issue is still being looked into. You can check the Trello card for this issue here. Sadly, no update or ETA has been provided on the card.

While earlier the Friend list not showing bug (or showing offline despite being online) was troubling limited users, going by recent reports surfacing on Reddit and Twitter, it appears that now majority users are affected by the issue.

Raven Software is yet to acknowledge the problem in question. As for workarounds, a lot of affected users have shared that players can invite or join friend’s lobbies through Discord.

For detailed coverage on crossplay not working in Warzone, head here.

Another possible workaround for friends not showing online is to create a regiment.

For this, navigate to the friends list and select the regiment tab, then select “create a regiment” and make a regiment name and regiment tag. After successfully creating a regiment, you should be able to invite friends using this option.

Apart from this, some players were able to invite friends by changing cross-play settings by heading to the options menu, selecting the tab, and switching the cross-play status to disabled, and restarting the game.

A new update with a lot of bug fixes is out now, but sadly, it doesn’t address the Regiment invite and Friends list issues highlighted in this article. Looks like the wait will be longer.

Yet another Warzone update is out but there are no signs of a fix for the Regiment invite and Friends list issues that have now been around for several weeks at this point. Raven Software is yet to divulge any further details apart from the initial acknowledgment.

It appears that the developers are having a hard time fixing the Regiment invites issue in Warzone since the problem is yet to be addressed. The changelog for the latest update does not have any mention of the issue getting fixed.

COD has now announced that a fix was released for DLSS and it should now be working as intended and that Regiment Invites will be fixed in an update coming next week. Next article Asus ROG Phone 2 finally bags its second OS upgrade to Android 11, albeit with a catch