Apple has been constantly improving the user experience on its iOS and the latest update, iOS 14, is a testament to that.

The tech giant has been steadily fine tuning its mobile operating system, however, some issues are still present on it. While Apple does acknowledge and work on iOS issues, it is not feasible to get rid of each and every single one of them.

Also, some major issues get fixed in a timely manner but the case is not the same for smaller issues.

Now, some iOS users have been complaining about an issue where the text size of the update notes is way too small.

As per multiple reports from a Reddit thread, it seems that the iOS update notes are being displayed in ridiculously small text size even after the system font size has been set to default.

This is not exactly a major issue but it is enough to be causing inconvenience to users who want to go through the update notes.

Moreover, users have pointed out that the issue is only present in iOS as the text size of the notes is normal in iPadOS.

It was also pointed out by an affected user that this was not the case with iOS before the iOS 12 update.

I think it’s been like this since iOS 12. What’s happening, Apple? I can’t even read it cause it’s so small on the small iPhone screen
Source

Users may get a fix for the said issue as the problem has been escalated to the relevant team, as per another affected user.

However, since Apple has not acknowledged this issue on a wider scale, it is unclear whether the alleged escalation will be enough to get things moving or not.

Hopefully, the issue gets resolved in future iOS updates because no one likes to use the magnifier accessibility for something that should be readable at default text size. 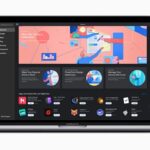 Microsoft Office 365 apps taking too long to open on Mac? You aren't alone (workarounds inside)