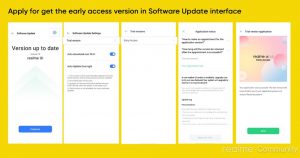 Realme 6i users are now receiving another Realme UI 2.0 (Android 11) beta update with version C05 on their handsets.