Rogue Company players on Xbox who tried playing the game today bumped into an error with code 3,102 that has been preventing them from playing it for a few hours now.

The free-to-play multiplayer tactical third-person shooter game is available on many platforms including the PlayStation 4, 5, Xbox One, Series X, Series S, Nintendo Switch, and Windows.

It appears the error code 3102 is showing up for Rogue Company players on the Xbox, PlayStation, and possibly on Windows too.

Reports of the issue have been flooding Twitter and Reddit. We’ve shared a few of them below for reference. “An unknown error occured (code 3,102) ” server maintenance or something? Ive tried restarting my xbox and my internet, but still nothing. Friend is having the same problem. Are the servers down? (Source)

@RogueCompany hey just curious…your error code 3,102….what is it and where’s the fix? Played for a week almost and no issues. But today I guess was the straw that broke Dimas back. (Source)

This suggests that the error isn’t specific to only one platform. However, we may have to wait for more details to be sure.

Here’s a screenshot of the error code 3102 that has been popping up when Rogue Company players try logging in to the game. 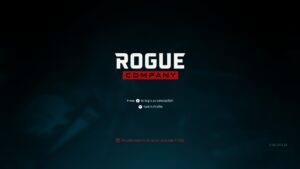 At the time of writing, the error has not been officially acknowledged in any shape or form.

This means that the error code could be due to scheduled maintenance or something entirely different. Only time will tell.

Whatever the case, we’ll post an update if and when there are any new developments. So stay tuned to PiunikaWeb.

Previous article Microsoft Surface Dock display issues with dual monitors come to light, no official fix in sight but there are workarounds