Realme has been sending out Android 11 with its Realme UI 2.0 skin to several smartphones including the Realme 7i through the Early Access and Open Beta programs.

The company opened up Early Access registrations for the Realme 7i in February and has been testing the update with a limited number of users right up until now.

And it seems that Realme is ready to take the next step in its beta testing process as the company has officially begun accepting applications for the Realme UI 2.0 Open Beta program for the Realme 7i.

The announcement was made on its community site for India wherein it has mentioned that the application channel is open starting today, i.e. April 30. Interested Realme 7i users will have to install the A.43 build to register for the Realme UI 2.0 Open Beta program.

If for some reason you’re dissatisfied with the Open Beta build or simply want to roll back to Android 10, you can do so. However, you would not be able to apply for the Open Beta program again.

The rollback package can be downloaded by heading here. Now that the Realme UI 2.0 Open Beta program is live for the Realme 7i, we can expect to see the stable update roll out in a couple of months.

That said, this isn’t the only new development. The OEM has also opened up the Realme UI 2.0 Early Access program for the Realme C15 Qualcomm Edition. 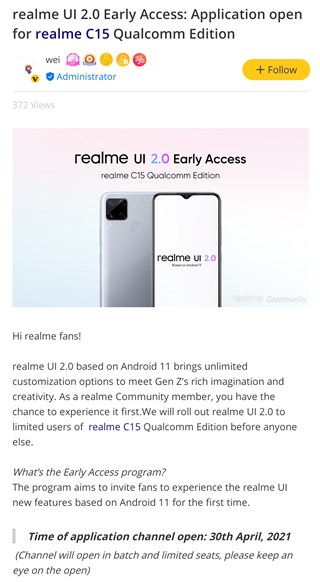 The device was scheduled to get the Early Access update in May so it appears Realme has sent out the update a day earlier than planned, which is, of course, a good thing.

Interested Realme C15 Qualcomm Edition users are required to update their devices to the build A.29 or A.31 before registering for the Realme UI 2.0 Early Access program.

As usual, the company will share the Android 10 rollback package file for the device in a short while.

Since this is an Early Access program, you might want to register as soon as possible to secure yourself a spot.

Otherwise, you might have to wait until the second round of recruitment begins or until the Open Beta program is announced.

Nevertheless, stay tuned to our dedicated tracker to know more about the status and availability of Realme UI 2.0 for the Realme 7i, Realme C15 Qualcomm Edition, and every other eligible device for that matter.