But it seems like along with the bug fixes, a new ‘bug’ has also managed to tag along. Several users are now reporting the appearance of a strange folder on the desktop after the macOS Big Sur 11.3 update.

So I have a strange folder on my desktop after the latest update called Relocated Items, but darn if I know what this is. Inside is a folder configuration with another folder called private and then another one inside private called ETC with a document I cant open called group.system_default that says “There is no application set to open the document” leaving me not even knowing what this is.
Source

The folder carries the name of “Relocated items” or “Newly assigned objects”. It contains another folder called “private” which in turn has another inside called “ETC”.

The “ETC” folder contains a document called “group.system_default”. But the document cannot be opened directly as trying to do so throws a “There is no application set to open the document” error.

A user did report that they were able to open the “group.system_default” file though by right-clicking and opening it with a text editor. The file was found not to contain any meaningful data and was filled with jargon.

If you are one of the users facing this issue then you will be relieved to know that it is actually nothing to worry about. Apple has described the folder as a product of update process:

In short, files that couldn’t be moved to their new location are placed in the “Relocated Items” folder. And the document inside is actually just a PDF with details about such files.

Also worth mentioning here is that this strange desktop folder isn’t something that has been brought about by the macOS Big Sur 11.3 update as it shows up occasionally on older macOS versions like Catalina as well.

In case you’re wondering if it’s safe to delete or not, a user has given an explanation for the same:

If that’s too technical, then you can just delete the folder on the desktop alone. Doing so won’t affect the actual folder in the actual directory since the desktop folder is just a shortcut.

03:00 pm (IST): A user has now given a new explanation for the issue and has once again emphasized that the desktop folder is deletable. 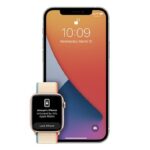 PSA: Turning off Wi-Fi disables unlocking your iPhone with Apple Watch when wearing a face mask