Nokia has been steadily rolling out the Android 11 update for eligible devices from its portfolio over the past few months.

Most recently, the company sent out the new Android OS to the Nokia 2.2 which came right in time as per the company’s schedule.

That said, the Nokia 2.4 was also scheduled to get the update to Android 11 in Q1, but we’re settled in Q2 and the update has only just made an appearance.

The company marked the rollout of Android 11 for the Nokia 2.4 via a tweet on Twitter where it announced that the new OS has landed for the device.

We haven’t yet come across reports from users confirming the arrival of the new software update on their devices.

That said, given the nature of Android OS updates, it may take a few hours, days, or even weeks for the update to go live for everyone.

Nokia has a dedicated site that shows off all the new features and improvements that you can expect with Android 11 such as the Messaging Bubbles and new app permissions. Now that the company has rolled out Android 11 for more than half of the devices that were scheduled for the update in the first quarter of the year, we can expect the remaining models to pick up the update soon as well.

IST 09:20 am Android 11 OTA update for Nokia 2.4 may not be readily available but device owners can still enjoy the big update by manually downloading it from here. 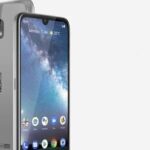