Pokemon Go is one of the most played augmented reality mobile games with over 140 million monthly active users.

The developer of the mobile game, Niantic, Inc., recently announced an event which allowed users to earn double XP bonus. However, Pokemon Go users have been facing an issue where they are not getting the double Friendship XP bonus.

As per reports, the double Friendship XP bonus is not getting added to users’ Pokemon Go profile when they use a Lucky Egg.

Also, reports suggest that this issue is being caused due to a notification delay bug and the same has been acknowledged by Niantic Support. 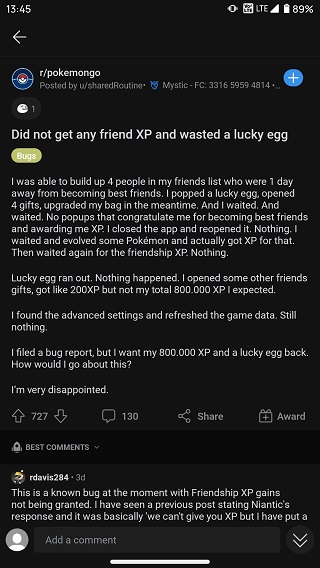 The Niantic Support Known Issues page has been updated with the said issue which is currently under investigation.

As per the issue description, users might get a delayed notification after using a Lucky Egg which further causes them to miss the double Friendship XP while their level increases.

Moreover, it is unclear how long will it take to address this issue as no ETA has been provided on the Known Issues page. Since a lot of users are affected because of this issue, it may take some time to release a proper fix.

Furthermore, it is only natural for such issues to occur in mobile games when new events go live.

Nevertheless, it is good to see that Niantic has acknowledged the issue and is already working to resolve it. Hopefully, the developer soon releases a fix for the said issue as it is preventing users from progressing in the game.

As an update on the matter, the support says the problem in question is only a mere visual glitch.

This is just a visual error, Trainer! Our team is working on a fix for this. However, the correct amount of XP should get added to your account. Always keep a track of XP before and after claiming to see the difference.