Oculus — a subsidiary of Facebook — produces some of the best VR (virtual reality) headsets such as the Oculus Rift and Oculus Quest.

The latest headsets offered by the company are the Oculus Quest 2 and the Rift S. While the former can be used as a standalone VR headset, the latter needs to be connected to a PC.

Although, the Quest 2 can be connected to a gaming PC to access Rift titles with Oculus Link. But, of course, you may already know that if you’ve read the title. So let’s get down to business. 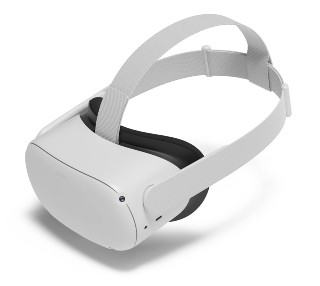 Some Oculus users using the Bigscreen VR app have apparently been facing issues with the microphone not working on Oculus OS v27 and v28.

FYI, version 28 was only recently released. So if you haven’t yet received the update, don’t fret. It should become available within the next few days.

Given the fact that the main reason to use the Bigscreen VR app is to hang out with friends in a VR setting to watch movies and play games, this is undoubtedly a major problem.

Luckily, the Bigscreen VR team has confirmed that Oculus has rolled out an update that fixes the bug and users should be able to use the microphone as usual to chat. 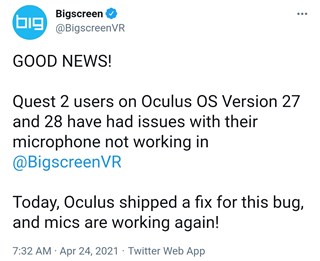 Once the update has been installed, the microphone issue should be fixed, at least partially. Why is that? Well, in a follow-up tweet, Bigscreen VR claimed that in some cases, plugging in headphones on the Oculus Quest 2 running on Oculus OS v28 also stops the microphone from working.

At the time of writing, Oculus is working on a fix for it. However, Bigscreen VR did share a temporary workaround for the issue that involves unplugging external headphones before launching the Bigscreen VR app. Oculus and Bigscreen VR have not shared an ETA for the fix but it’s likely that affected users won’t have to wait all that long.

As usual, we’ll post an update once new details emerge regarding the microphone issue with the Bigscreen VR app for the Oculus Quest 2.

Next article iOS 15 update: Here are 10 features users would like to see