[April 22: Fix rolling out] Google Chrome pages/content on iOS gets squashed on changing device orientation; fix in the works

Google Chrome may be the most popular web browser on Android but it has also got quite a sizeable fan-following on iOS. A huge contributing factor behind this is the fact that it is cross-platform, unlike Apple’s Safari browser.

And while reviews of the browser have mostly been positive, no software is perfect and Chrome for iOS is no exception.

In the past, we highlighted that users were bumping into troubles when saving GIFs through Chrome. And recently, there have been plenty of complaints doing rounds which state that content on Chrome gets squashed on iOS.

When I’m using Google Chrome for iOS on my iPhone 11, if I tilt the screen from portrait to landscape and back to portrait, the app shows margins on both sides that shrink any webpage I’m using. Then scrolling down causes the margin on the left to shift to the right making the webpage offset to the left.
Source

With latest iOS release on IOS 13 and 14, if I display a page with the phone in portrait, then rotate phone to landscape, then rotate back to portrait, the web page is shrunk and does not display full screen, eg there is a blank area on the right.
Source

As apparent from the above complaints, users report that orienting the device to landscape and then back to the portrait mode messes up web content. And refreshing the page or going back/forward doesn’t help.

The site functions just fine but displays with huge margins on the sides that limit the viewable area. Or in other words, web pages display with blank spaces on sides.

A screenshot is given below to demonstrate this.

The issue does seem to be from Google’s end considering that it has started only recently, perhaps after a bad update, and due to the fact that it is reproducible on both iOS 14 and iOS 13.

The good news though is that a product expert has stated that Google is aware of the issue and is already working on a fix. And for the extra curious tech-savvy ones, the bug has been merged into Chromium Issue 1150075.

Moreover, the product expert has also provided a possible workaround along with the acknowledgment that you can try.

But in case it did not work for you, the only available option, for now, is to tap the address bar to type and then out of it to return the web page to its normal state, as this user has pointed out.

Additionally, you can simply close the tab and open the link on a new one. This will also fix squashed content on Chrome for iOS temporarily.

Not the perfect fixes, we know. But that’s all one can do until a bug-fixing update is rolled out.

With that being said, be sure to check out our iOS 14 update bugs/issues tracker for further coverage on similar issues.

One of the affected users has suggested a workaround that may fix this issue for you as well, at least temporarily.

1. Open Chrome on iOS and go to the following address: chrome://flags
2. Scroll down to find: Full screen Smooth Scrolling
3. Select disable from the dropdown
4. Quit and restart Chrome
Source

Going by the recent user reports, while the problem persisted in iOS 14.4, it has made way even to the iOS 14.5 beta.

Going by the information shared at Chromium Issue 1174435 (a duplicate of issue 1150075), the problem will be addressed in the upcoming update:

We are aware of this issue. The next release will fix it.

A new temporary workaround has been shared by one of the affected users. So you can give it shot.

Tapping into a text box and pulling up the keyboard will bring back full width of the page, but it’s still super annoying.

The problem has been marked as fixed as the issue has been resolved at developers end. But end-users will have to wait. Here is the latest status update on the matter:

This is marked as Fixed since it is fixed in the latest developer build. However, due to unavoidable Stable delays on this platform, this is not yet fixed in Stable.

The Chrome iOS app has been updated to version 87.0.4280.163, and going by reports, the margin problem appears to have been addressed. The changelog, however, doesn’t convey this.

So we suggest you all to install the latest version of the app and let us know if the problem has been resolved for you by dropping a comment below.

Google has officially confirmed the problem has been addressed with an update. Here’s what a company employee said recently:

Thank you for your patience while we investigated your reports and feedback about this behavior.

An update is rolling out now that addresses the underlying cause, and should resolve the behavior. 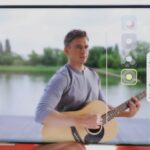 [Update: Official word] Don't like Google Chrome Reading list in bookmarks bar? You may soon not only be able to hide but also move it to toolbar