The Android 11 update for the OnePlus 7 series of devices has been the topic of discussion in the community forums for a while now.

Recently, we saw the company finally rolling out the initial Open Beta builds for the OnePlus 7 and OnePlus 7T devices. That was about a week ago.

Since then, users have been installing these developmental builds on their devices and taking it through its paces, and as expected, a few bugs reared their ugly heads.

We already know about the missing Always-on-Display feature although reports now have it that this will be added back in subsequent builds.

There have also been reports of issues with slow Warp Charging by a section of these device owners and we have looked at a potential workaround that seems to have worked for affected users.

As it turns out, there is yet another issue that is a little more dire and detrimental to the basic phone experience on the OnePlus 7 devices, at least in this first Open Beta build.

According to Google Fi users of the OnePlus 7 running OxygenOS 11 (Android 11) Open Beta 1, their devices have a bug that renders them unable to answer incoming calls.

I just updated my OnePlus 7 to Android 11 Beta. It’s working well for the most part. One annoying bug is that I can’t pick up incoming calls. My dialer won’t engage when I try to swipe up to answer or hit the green phone icon in the notification. So, I have to call the person back. Making outgoing calls is no problem. Anyone else having this issue and know how to fix?
Source

According to affected users, basic troubleshooting measures such as clearing cache and storage for the dialer app, using the Google Dialer and even factory resetting don’t seem to offer any relief.

I have this problem as well. Persists after a hard reset. Call appears to be answered with the stock dialer app, yet continues to ring on the other end. With the Google dialer, touching Accept on the toast notification opens the dialer, but doesn’t answer the call. Still have an option to swipe to answer. Swiping to answer blanks the screen, then the screen reappears for another swipe. Calls still continues to ring on the other end, My carrier is Google Fi, OnePlus 7 Pro.
Source

At the time of writing, neither Google nor OnePlus had issued an official acknowledgment of this OnePlus 7 Google Fi calls problem. This, even as more and more affected users (1, 2, 3, 4, 5) continue to voice their complaints.

10:50 am (IST): OnePlus released the OxygenOS 11 Open Beta 2 update a few days ago, however, it appears that users are still unable to answer incoming calls on Google Fi. Some users (1, 2, 3, 4, 5) have taken to the company’s forums to report the problem.

11:48 am (IST): Unfortunately the issue has persisted even with the recently released OxygenOS 11 stable update. This is clear from several new complaints: 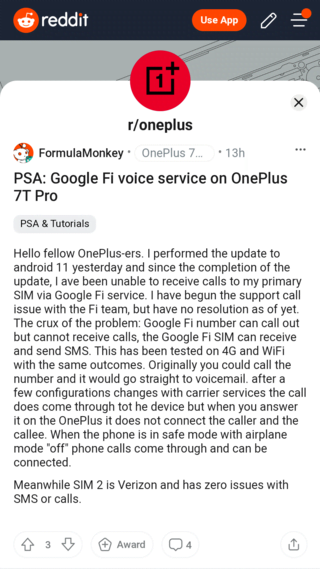 12:48 pm (IST): It is now coming to light that users of the newly-released OnePlus 9 has the same Google Fi issue.

Got my Oneplus 9 yesterday. Everything works good, but I can’t answer any calls. The call comes in, I swipe up to answer and the google dialer goes blank and nothing happens. The call just keeps ringing. Any ideas what would cause this? I rebooted the phone as well.
Source

IST 10:10 am: While the above-mentioned workaround seems to be working for a number of affected users, OnePlus has finally acknowledged this issue.

IST 03:19 pm: The ongoing Google Fi issue on the OnePlus 9 has now been addressed with the OxygenOS 11.2.4.4 update as mentioned in the changelog.

Previous article [Updated] Overleaf down, not able to access website or encountering server error? Issue is under investigation