Google markets its Wifi router as “A smart buy for fast, reliable Wi-Fi.” But it seems that the recent experience of some users might lead them to disagree with this statement.

According to ongoing reports from Google Wifi router users, their connection status has suddenly started dropping from ‘Great’ to ‘Weak’ without touching anything.

We’ve added some user reports below for reference: 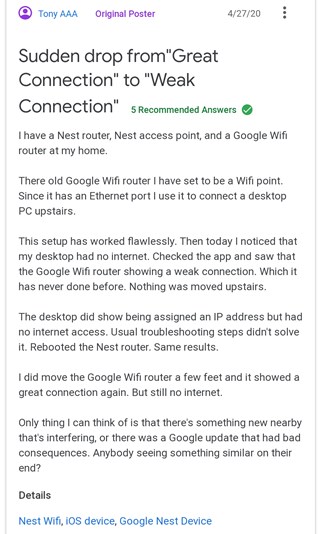 I have a TPlink primary and 3 Google wifi pucks. 3 days ago all of my wifi pucks went from great signal to weak. I move all the pucks in the same room as the primary and still get weak signal. (Source)

I am having the same issue which started in the last few months. Everything had been working great with exceptional signals, then went to weak. Nothing was changed and nothing was added. (Source)

The problem has been around for a while now and it was escalated to the team last year in October but Google has not yet come up with an official explanation or fix. This has led some users who’ve noticed that their Google Wifi router connection dropped from ‘Great’ to ‘Weak’ to come up with their own workarounds.

In case you’ve been experiencing the same issue, then you may want to try out some of the workarounds shared below.

Factory reset one of the puck, and issue got resolved. I started with the one closest to primary puck. Signal is now great for all 3 pucks. (Source)

I had this same problem. I had 8 units in a large home. Kept getting drops and weak signal. I removed 3, and started from scratch. I followed the steps to delete cloud data, hard reset each unit, remove all cables, and wait for modem to fully boot up. No more issues at all for 3 weeks! (Source)

In case the two workarounds shared above bore no fruit for you, then try out these troubleshooting steps provided to a user by Google support: Well, these are the workarounds you can try out if your Google Wifi router suddenly dropped from ‘Great connection’ to ‘Weak connection’.

Feel free to let us know whether or not the workarounds helped you fix the problem. As usual, we’ll post an update if and when there are any new developments regarding the issue.