In the same year, multiple users started reporting about an issue where they were unable to reset their Google Home Mini units. Also, several reports outlined that the reset issue was affecting users of the Google Nest Mini units as well.

As per the reports, the Google Home and Nest Mini units showed four solid white lights and did not reset whereas one green light was shown when the reset button was pressed.

However, Google identified the cause of the reset issue and released an update to address the same. Now, it seems that the problem has resurfaced as users are again reporting about the same issue on the Google Support community.

It seems that once again users of the first generation Google Home Mini units are among the most affected.

Since support has ended for the first generation Google Home Mini units, the tech giant might not be providing a fix to those devices this time around. 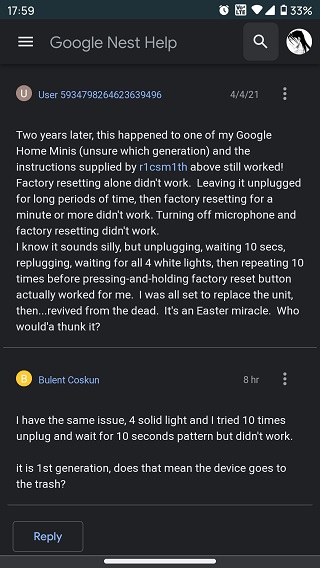 So, in this case, those facing the issue have little to no options but to try a workaround that seemed to resolve the issue for some users when it was first posted in July 2020.

The workaround involves unplugging the affected device for 10 seconds then plugging it back in. Once four white lights appear unplug the device again for 10 seconds and repeat the same process 10 times.

Once done, pressing and holding the mute button for 15 seconds will force the device to reset successfully. It seems that the workaround is still working for those who are facing the issue again which is a good sign.

That said, we will keep tracking this for further development and will provide more details once new information becomes available so stay tuned.

Next article Upcoming Xiaomi Redmi gaming phone will be the first to come with MIUI 12.5 stable out of the box