Dark mode is now a staple feature in many software applications across various devices like smartphones, tablets and computers.

In fact, gone are the days when enabling dark mode was dependent on individual app developers. Today, major software companies like Google and Apple have built-in system dark modes in Android and iOS, for instance.

This means that users can choose to have an entire system based on dark mode, such that all apps, settings, and entire UI abides by the general system rules and turn dark. 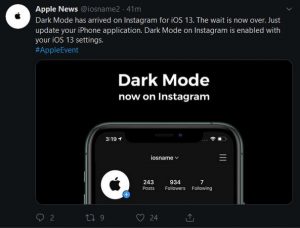 On the brighter side, the fact that individual apps also have their baked-in dark mode toggles means that there is always room to make custom choices on this matter.

For instance, even with the default system theme set to dark mode, one can choose to have select apps displaying in a light theme. But for some reason, iOS users have been unable to do this on the Gmail app.

In order to pick a display theme on Gmail app for iOS, one has to open the app and in the top left corner, tap Menu > Settings > Theme and then choose between Light, Dark, or System default.

But for iPhone users on iOS 14.4 and above, there seem to be an issue where the Theme setting is missing from the menu. As a result, they are unable to change the Gmail background theme to their liking.

With the latest update to the Gmail iPhone app (which was the first update in 3 months), we seem to have lost the ability to switch the theme in the app to Light Mode, Dark Mode, or System Default. The menu option for Themes no longer exists in the settings menu like all of the Google documentation points to.

It appears that it now uses the System Default with no way to change it. The way I reached this conclusion is that my system is set to Dark Mode, but I specifically had Gmail and a couple other apps set to use Light Mode instead because I don’t like the way they look in Dark Mode…and now my Gmail is in Dark Mode with no way to change it unless I switch my entire OS to Light Mode, which is not an acceptable alternative.
Source

Using an iPhone 11 pro max and I woke up this morning and the theme was dark. I’ve checked my Gmail settings, and there’s no Theme available to toggle. I’ve re-installed the app. No luck. Any thoughts?
Source

There are a bunch of similar reports doing rounds all over the web. And apparently, this Gmail dark theme issue started showing up after a recent update to the iOS app — an update that users had been waiting for ages.

Up until now, there is no official word from Google or Apple for that matter. But a forum product expert does opine that this could be a bug in the Gmail app, urging affected users to report via the feedback tool.

As usual, we will be keeping an eye on this story and let you know if and when there is an official fix, but for now, there is a workaround that seems to fix the problem temporarily.

1. Open your app
2. Select any email
3. Select the 3 dots in the top right of that email
4. Select “view in light theme”
Source

Unfortunately, affected users will have to repeat the above workaround for every email they open, which is definitely not the experience Gmail users want. Hopefully, a fix comes out soon.

(IST) 13:40 pm: Gmail support on Twitter is also suggesting the affected users to submit feedback regarding the issue. Here is what they say:

Could you submit the feedback regarding this here: Gmail App > Menu > Send Feedback? Appreciate it!