The Mi 11 was unveiled globally following a launch event alongside Xiaomi’s upcoming MIUI 12.5 update. And based on its spec sheet and reviews, the device is quite promising, to say the least.

It screams next level in almost every aspect and brings about plenty of improvements over its predecessor – the Mi 10/10T. For starters, the Mi 11 is the very first device to ship with the Snapdragon 888 processor which happens to be Qualcomm’s most powerful offering to date.

Then there’s the other stuff like a cinematic 108MP shooter, Harman Kardon optimized audio system, gorgeous WQHD+ 120Hz display, all packed within a sleek body with a width of just 8.1mm.

That said, the Xiaomi Mi 11 hasn’t bagged first place in the processor department alone. As it stands, the device has also turned out to be the very first mobile phone to allow heart rate measuring through the screen itself. Now, heart rate measuring isn’t exactly a novel feature in smartphones as we have seen many instances in the past that allow this using the rear camera and LED flash.

However, measuring the pulse rate through the screen itself is definitely a first. It also offers huge convenience, as previously, the finger had to be placed on the camera lens which would almost always dirty the latter.

All this has been made possible through Chinese vendor Goodix’s ultra-thin optical in-display fingerprint sensor. This scanner literally takes a photo of your finger, just like a camera would.

Xiaomi had previously added camera and LED flash heart rate monitoring support to its Mi Health app back in September, so an implementation like this only makes sense for a more integrated experience.

That said, the feature will not be available out of the box. This is pretty clear from the Mi 11’s website.

Emphasis on the words ‘may be’. They do signal uncertainty but considering the fact that in-display heart rate monitoring has been an integral part of Xiaomi’s promotion for the Mi 11, it wouldn’t be healthy for them to abort at the end, would it? 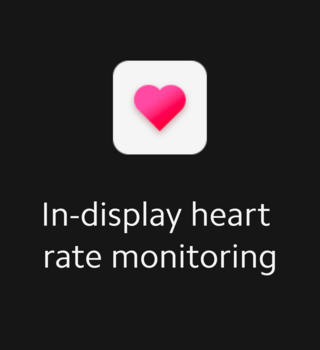 Therefore, it is highly likely that an update that will enable in-display heart rate monitoring should hit the Mi 11 soon through the Mi Health app or even a system update.

Nonetheless, for now, you would want to keep an eye out on our dedicated MIUI 12.5 tracker for the status of the update for your device.