The Asus ROG Phone 3 is currently one of the only few devices that have the latest Snapdragon 865+ SoC. Further, being a gaming-oriented smartphone, it has a bunch of other tricks up its sleeves such as the AirTriggers and additional charging port.

Further, the company has also sweetened the deal for custom ROM developers and users since they’ve released the kernel source code and the bootloader unlock tool for the device. Asus also released the first update for the device a day ago.

But not all the information coming out for the ROG Phone 3 is positive. According to Mishaal Rahman, Editor in Chief over at XDA, the ROG Phone 3 on T-Mobile does not support VoLTE. This is apparently the case on the review unit of the device.

Further, in an article published on XDA, there’s a bit more information provided on the matter regarding VoLTE support for the ROG Phone 3. Here’s a snippet from the post:

The recently announced ASUS ROG Phone 3 does not currently support VoLTE on the network, for example. It’s not that these phones can’t support VoLTE on T-Mobile, it’s just that the device maker hasn’t done the work to outright support it.
(Source)

However, this is not surprising since the ROG Phone 2 also lacked VoLTE support on T-Mobile in the US. Last month we reported that the ROG Phone 2 received an update that brought VoLTE and VoWi-Fi functions in Sweden and France. But the US variants still do not support it on the T-Mobile network.

This is the very reason why some potential buyers (1, 2, 3) of the ROG Phone 3 are seeking answers surrounding the availability of VoLTE over the T-Mobile network. Here are a few screenshots from concerned individuals:

Click/tap to enlarge the images

Luckily, there appears to be some hope. According to a user’s comment on the XDA forums, there is a particular model of the ROG Phone 3 that will indeed support VoLTE on T-Mobile.

Your not using the a model. There is an a, and a b model. The a model has full support of TMO bands, and volte.

The good news does not end there. This is because the ROG Phone 2 got an unofficial workaround to enable VoLTE on the T-Mobile network. Thus, it wouldn’t be too much to expect the ROG Phone 3 to get a similar treatment.

Further, in the same article from which we pulled the statement regarding the VoLTE availability for the ROG Phone 3, there’s also more information that points out the fact that T-Mobile along with AT&T will not support any devices without VoLTE enabled from 2021.

This decision is a big win for users who feel cheated by OEMs such as Asus for not bringing VoLTE support to their devices. Nonetheless, we will still have to wait for the device to go up for sale to know for a fact whether or not it supports VoLTE on T-Mobile’s network.

It is possible that even if the device does not support the function from the get-go, Asus may enable it via a software update. Speaking of which, you can check out our Asus Android 11 eligible devices list to know whether or not your phone will receive the upcoming Android update.

ROG Phone 3 users with AT&T connections can finally rejoice since the latest update — version 17.0823.2008.79 — has enabled VoLTE support on AT&T according to the release notes.

Asus has released a new update for the ROG Phone 3 which enables the VoLTE on Telia, Rakuten, and Maxis along with VoWiFi on CMHK, CSL, 3HK, and Smartone.

The update also includes the December security patch along with a couple of fixes and a bunch of improvements. Check out the complete changelog for the update version 17.0823.2012.122 below:

– Fixed issue where Bypass Charging feature would occasionally not work
– Improved 5G Connection stability
– Fixed audio crackling and static noise when recording the music with SMULE APP.
– Turned on the “Auto-download-and-installation via Wi-Fi” setting in System update by default
Source 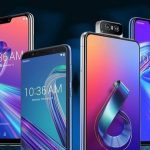