OPPO has confirmed that the ColorOS 7.2 update based on Android 11 for the Global OPPO Find X2 units will be arriving in the near future. However, the company did not share an ETA for the rollout. See the full story here.

OPPO has kick-started the closed beta recruitment for the Android 11 update for the OPPO Ace2 in China. A limited number of interested users can sign up for the closed beta program. For more details, head here.

IST: 06:15 pm: Oppo has announced that it will kick-start its recruitment for beta testers for the Android 11 update on the Oppo Find X2, Find X2 Pro, Reno3, and Reno3 Pro outside of China on September 7. See more details here.

IST: 11:30 am: Oppo Ace2 and Oppo Ace2 EVA Limited Edition are also a part of the Android 11 beta recruitment which is supposed to go live from September 7, 2020. More on that here.

IST: 05:23 pm: Oppo has announced that it is now recruiting individuals who want to participate in the Android 11 (ColorOS 8) closed beta program for the Oppo Reno4 Pro in China. Head here for more details.

IST: 07:30 pm: Android 11 beta (ColorOS 8) beta program kick-started today for the Reno3 and Reno3 Pro devices in Malasia, with a limited quota of 2000 spots. But due to the recruiting channel server issues, the same got delayed to 10:00 (GMT).

IST: 02:14 pm: Oppo has now opened up the recruitment for Oppo Find X2 and Oppo Find X2 Pro users in India, Indonesia and Thailand for the Android 11 beta. The company has set a 2000 user quota for this update. Head here for all the details.

IST: 10:07 am: Google has finally announced the release of Android 11 today. Unlike earlier, the update will be released for select devices from Oppo and a few other OEMs alongside Google’s own Pixel smartphones. We will update the tracker once Android 11 begins rolling out for eligible Oppo phones.

IST: 10:36 am: Oppo has decided to switch things up with the name of its upcoming skin based on Android 11. Rather than naming it ColorOS 8, Oppo has officially named it ColorOS 11 and it is set to launch on September 14. 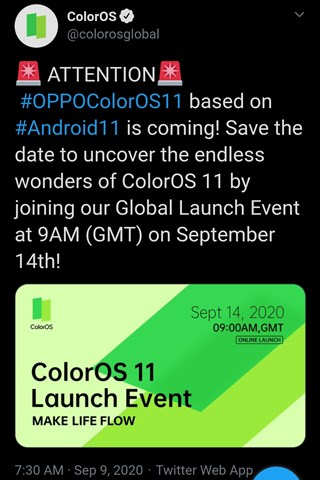 IST 04:54 pm: Reportedly, Oppo will be rolling out the Android 11-based ColorOS 11 update for the Oppo F17 Pro in India. Interested users will be able to install it starting from September 30.

IST 06:51 pm: It seems that Oppo is sticking to its plans and is set to release the ColorOS 11 beta update based on Android 11 for the Oppo Reno3, Oppo Reno3 Pro, Oppo Reno4 5G, and Oppo F17 Pro today itself. Head here for all the details.

IST 03:57 pm: Oppo has teased that it will make use of its new Quantum Animation Engine 2.0 with the ColorOS 11 (Android 11) update to enhance the visual experience on supported devices. More details here.

IST 01:57 pm: A recent development suggests that some of the new features found on ColorOS 11 will not be available on certain other ColorOS 11 (Android 11) eligible devices due to hardware limitations, local regulation, and other factors. See all the details here.

IST 02:01 pm: Oppo claims that its new UI First 2.0 feature baked into ColorOS 11 allows for up to 15% better app loading times when compared to ColorOS 7. Check it out here.

IST 02:00 pm: Responding to a user’s query regarding Android 11 for the Oppo Reno4 Pro, the Oppo Care India Twitter handle stated that the update will go live in November for the device. 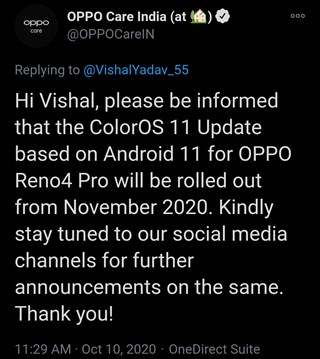 IST 01:35 pm: It has come to light that the first batch for Oppo F17 Pro and Reno3 Pro ColorOS 11 (Android 11) beta testers is now full. But there’s no word on when the recruitment for the next batch will start. Full story here.

IST 10:58 pm: Oppo has now announced that it will be releasing the ColorOS 11 beta for the Reno4 Pro 5G on October 28. Therefore, Reno4 Pro 5G users can expect to get the update within a matter of two weeks.

IST 05:19 pm: It seems that the Android 11 update for the Oppo K3 may not be arriving since the device isn’t listed on the official ColorOS 11 timeline and the company’s India support team on Twitter has also confirmed the same.

However, Oppo has mentioned that the update will be available on 28-plus models including devices from the ‘K’ series. Therefore, these conflicting reports make it difficult to say whether the device will get the update or not. More details here.

IST 06:46 pm: Oppo has announced that it is now looking for ColorOS 11 Alpha Testers for the Oppo Reno4 Pro 4G in India. There is a quota of only 100 members. Thus, if you want to be an Alpha Tester, you may want to apply soon.

IST 02:30 pm: The latest ColorOS 11 beta update for the Oppo Find X2 has added a new feature called FlexDrop which allows users to launch any app as a floating window and move it anywhere on the screen for easier multitasking. You can check out a demonstration of it here.

IST 03:05 pm: Oppo is now recruiting Reno4 Pro 5G users to test the ColorOS 11 beta in the UAE and Saudi Arabia. The quota is set to 4000 users and users can apply to the program today.

If the application is successful, users will get the update within three days. Keep in mind that to receive the beta, you will have to install version CPH2089PU_11.A.19 or later.