The Xiaomi Mi Box 3 released almost four years ago and came with Android Marshmallow pre-installed. Since it’s launch, it has been updated to Android 8.1 which it is running on at the moment. Mi Box 3 users have been waiting a long time to get the Android 9 Pie update but Xiaomi didn’t divulge many details about the update.

But in typical Xiaomi fashion, the newer device has been receiving all the attention, which in this case, is more software updates. Thankfully, it now appears that Xiaomi has finally managed to shift its focus back to the Mi Box 3. A Redditor has shared an image of a new software update arriving on the Mi Box 3. 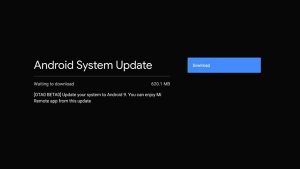 This new update brings the much-awaited Android 9 Pie OS to the smart box. However, there’s a catch. The Android Pie update for the Xiaomi Mi Box 3 isn’t yet rolling out to all units. Instead, it’s only available to beta testers.

Those who are signed up for the beta program should be receiving the update with the software version R2810 on the MDZ-16-AB model. Unfortunately, there’s no word on when we can expect to see the stable Android Pie update rollout for the Mi Box 3.

Judging by the Pie update for the Mi Box S, it might take a while before the stable update rolls out. As usual, we will continue to keep track of the Android Pie rollout for the Mi Box 3. In the meantime, you can check out our dedicated Xiaomi section for more coverage on the brand.

Xiaomi has now begun to roll out the Beta-1 update based on Android 9 Pie for the Mi Box 3. Previously, it released the Beta-0 update. A user on Reddit has confirmed receiving the update by sharing an image: It appears that Xiaomi has finally released the stable Android TV 9.0 update for the Mi Box 3. The update comes in at 650 MB and also brings the July 2020 security patch. A Mi Box 3 user has also confirmed receiving the update on Twitter.