The OnePlus Nord was one of the most hyped smartphones to be released this year. Traditionally, OnePlus has been selling ‘flagship killer’ smartphones exclusively. The company tried to dabble in the mid-range market a few years ago with the OnePlus X but scrapped the idea soon after.

But it appears that OnePlus is confident with its mid-range offering this time around. Matter of fact, it created more hype for the release of the OnePlus Nord than it did for its flagship OnePlus 8 series.

Unfortunately, soon after the device was released, users began noticing a major issue. Many had started reporting about green tinting issues when the screen’s brightness was low. The same issues were previously reported on the OnePlus 8 and 8 Pro too.

So things didn’t seem to be off to a good start for the OnePlus Nord. And now, users are reporting another issue altogether. Apparently, the OnePlus Nord has Bluetooth connectivity issues of all sorts.

Several user reports are starting to surface on the company’s community forum and other places such as Twitter and Reddit. According to many users, the Bluetooth on the OnePlus Nord keeps getting disconnected frequently. Some even report that Bluetooth earphones do not connect automatically.

Furthermore, a handful of users are also reporting that there are sound quality issues when streaming audio via Bluetooth from the device. Therefore, the Bluetooth issues don’t appear to be limited to one particular problem. We’ve added some of the reports (1, 2, 3, 4, 5, 6) below: 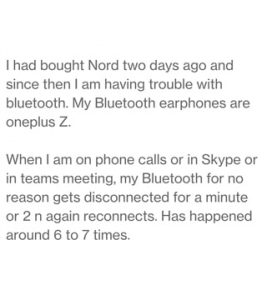 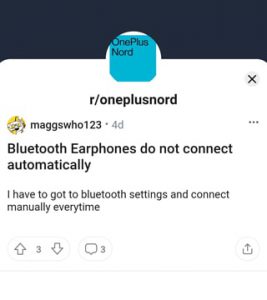 i have oneplus Nord (8,128) blue marble. I’m facing Bluetooth connectivity during calls. It get auto disconnected. So i want oneplus to resolve this issue as soon as possible as many peoples facing same problem.
(Source)

I’m using #OnePlusNord
When I connect bluetooth to my wireless headset or to a car, it’s automatically gets disconnected after 5 mins??? What should I do now !!
(Source)

I’ve been using OnePlus Bullets Wireless Z with OP3 and OP7T without any issues. But there are serious bluetooth connectivity issues in OnePlus Nord. When I’m using WiFi (on 2.4GHz band), the bluetooth keeps getting disconnected/connected every few seconds and this issue does not occur when I’m using WiFi on 5.0GHz band or Mobile data. Same is with mobile hotspot, when the hotspot’s AP band is set at 2.4GHz, the bluetooth is not able to pair up with the device. But when Hotspot’s AP band is changed to 5.0GHz, there are no issues pairing up.
(Source)

As you can see from the reports above, the issue seems to be wide-spread. Matter of fact, a quick search of the issue on most social platforms will bring up dozens of reports from affected users.

Unfortunately, OnePlus has not yet acknowledged any of the Bluetooth issues on the OnePlus Nord yet. Therefore, affected users might have to wait a long time before the company releases an update that may potentially fix the problem.

A couple of years ago, we had reported about severe Bluetooth issues on the OnePlus 5/5T and OnePlus 6. And now it seems the OnePlus Nord has fallen victim to the same. We will continue tracking the situation and will post an update once new information is available.

IST: 07:30 pm: While we recently reported OnePlus Nord Bluetooth connectivity issue, OnePlus swiftly reacted and has now started rolling out an update to fix the prevailing issue. The latest update comes with version number 10.5.6.AC01DA and weighs 54MB in size.

In the meantime, check out our OnePlus Android 11 update tracker to know when it arrives on your device. Also, here’s a list of eligible phones from OnePlus for the upcoming Android version.

IST 11:15 am: Apparently the troubles for OnePlus Nord users don’t seem to take a break. Many users are now reporting (1, 2, 3, 4, 5, 6, 7, 8, 9, 10) that the Nord’s battery is draining at a higher rate when idle after installing the latest software update. OnePlus is yet to acknowledge the issue publically.