Android 11 has finally arrived and OEMs are now preparing their in-house OS versions (custom UIs) to be pushed to the eligible devices as soon as possible. Realme and Oppo have already released the beta iterations of their Android 11 update which means that stable builds are getting ready as well.

It must be noted that OEMs this year are pretty quick with their latest OS updates as it usually takes some time for even the beta versions to pop up once Google releases the stable Android version.

We earlier saw a glimpse of the Android 11-based Realme UI 2.0 beta update for Realme X50 Pro which included a lot of improvements. Now, we have a detailed understanding of Realme UI 2.0 and ColorOS 11 beta updates.

Many users are testing the new custom UIs from Realme and Oppo while also sharing their insights. The YouTube channels Techniqued and Mr. Phone have posted videos of ColorOS 11 and Realme UI 2.0 outlining all major changes.

Since there are limited slots for the ColorOS 11 and Realme UI 2.0 beta previews, not many users might get to test the skins. So, let us take a look at what all the latest custom skins from Oppo and Realme have to offer.

Both ColorOS 11 and Realme UI 2.0 offer a revamped quick settings panel in the for an opaque card on top of a blurred background. The settings menu is also overhauled with smart grouping of options like Personalizations which was not present in ColorOS 7.2 and Realme UI 1.0.

There is an option for Edge Lighting for calls and notifications which was not present previously on both skins. Another cool option is Ringtone maker which allows ringtone customization in a simplistic manner.

Apart from this there are major improvements in the dark mode as it now offers three different styles. The launcher settings are also overhauled and third-party icon packs are now supported on both, Realme UI 2.0 and ColorOS 11.

Another cool features on both skins is the App Lock quick settings toggle switch. Moreover, there is the System cloner option which creates a clone of the system so that multiple users can use the same device.

It must be noted that there are no major differences between Realme UI and ColorOS for Oppo is the parent company of Realme. While there are many more changes in terms of user interface and performance, these are still beta builds, hence, even more changes are expected in the stable versions.

That said, we are closely following the development of Android 11-based ColorOS 11 and Realme UI 2.0 updates so be sure to stay tuned to PiunikaWeb. Also, we have a consolidated Android 11 update tracker for all major OEMs and carriers so you can check it out as well.

It seems that Realme has not yet finalized the Early Access program for Realme UI 2.0 based on Android 11. The company removed the Early Access timeline coverage from its recent launch event and it also deleted a tweet with a detailed Early Access roadmap that you can check out here. 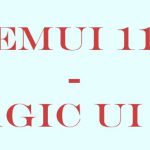