Even though Google released Android 10 back in 2019, for some odd reason Xiaomi chose to launch the Redmi 8A Dual with Android Pie pre-installed. Therefore, the device has been in line to receive the update to Android 10 for a long time.

Previously, we had reported that a moderator had confirmed the Redmi 8A Dual will get the Android 10 update. However, no ETA was shared regarding the rollout. And just a day ago, we shared information regarding some Xiaomi phones that are yet to bag Android 10.

Furthermore, users (1, 2, 3, 4) are also sharing screenshots of the new Android 10-based update that is currently rolling out. The software version is 11.0.1.0.QCQINXM and it’s available to users over the air with a download size of 1.6GB. 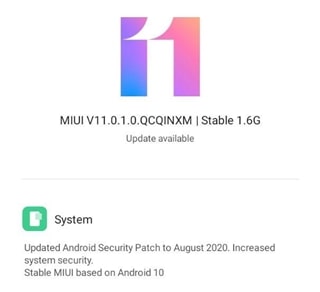 Unfortunately, the update is rolling out alongside the existing MIUI 11 skin rather than the much-anticipated MIUI 12 skin. This also means that users won’t notice any significant changes after installing the update to Android 10.

As you may have noticed from the changelog from above, the update also brings the August 2020 security patch to the device. Like most other airborne updates, it may take anywhere between a couple of hours or days before it arrives on your unit.

So if you don’t want to wait for the Android 10 OTA package to arrive on your Redmi 8A Dual, you can download and install the new software version via the link below:

Now that the Android 10 update has been released for the device, Xiaomi can shift its focus to bring the MIUI 12 skin for the Redmi 8A Dual. Therefore, keep an eye out on our dedicated tracker for the MIUI 12 rollout to know when it arrives on your device.

IST 01:01 pm: Xiaomi has now begun rolling out the stable Android 10 update with MIUI 11 on top for the Redmi 8A Dual in Indonesia as well. The new update bears the software version 11.0.1.0.QCQIDXM. You can manually download and install it via the link below: