Asus is known for its gaming hardware across the globe. Also, the OEM offers some of the best smartphones like the ZenFone 5Z. The device came out back in 2018 and was a true flagship from Asus.

The OEM is known for regularly updating its devices and the ZenFone 5Z is no exception. However, users have been facing some issues with their ZenFone 5Z. We reported earlier that there was an issue where the camera did not focus and captured blurry images.

The camera issue was reported by a lot of users running different firmware versions on their ZenFone 5Z. Some generic troubleshooting was also provided by Asus customer support but clearing the camera app data did not help much. Also, the OEM did not acknowledge the problem on a bigger scale and users have been waiting for a resolution ever since. Now, a new development related to the ZenFone 5Z camera issue appears to be taking place.

While ZenFone 5Z users took to the Asus ZenTalk community, a moderator asked them to take their device to Asus repair center. Also, users have been asked to reach out to Asus support over phone in case they are unable to visit the repair centers due to the pandemic restrictions.

After investigation, we suggest you to bring your phone to ASUS repair center for device checking. 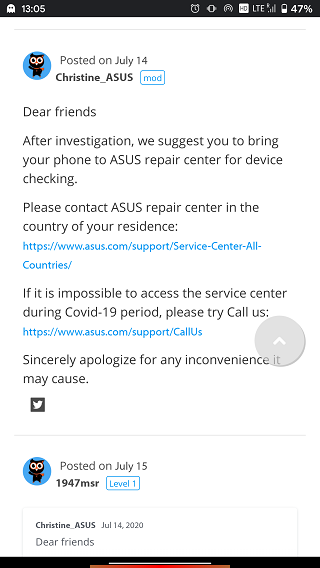 It must be noted that this issue has been persistent for some time now and Asus has still not provided any details. The affected users have been addressed individually but considering how many of them are facing this issue, Asus should address it on a bigger scale.

Hopefully, the OEM takes appropriate actions soon as a huge number of ZenFone 5Z users have been waiting for a fix. Meanwhile, you can check out more such stories by heading over to our dedicated Asus section.