Huawei has recently run into some turbulent times following the US trade ban that resulted in new devices from the Chinese tech giant shipping without Google Play Services, a massive deal-breaker in many markets across the world.

Despite this, according to data from Statcounter, Huawei takes third place in the worldwide ranking of Mobile Vendors by Market Share, only trailing behind Samsung and Apple. One of the flagship devices from Huawei that were launched before the May 2019 trade ban was the Huawei Mate 20 Pro. Unveiled back in October 2018, this device was a true flagship at the time, powered by the company’s in-house Kirin 980 Chip and running Android 9 Pie with Huawei’s EMUI 9 out of the box.

Currently, the device runs Android 10-based EMUI 10 but software development for this and other Huawei devices has generally been a little bit slower. Nonetheless, Huawei continues to chug along despite these hurdles, and today, we have EMUI 10.1-related reports that will delight Huawei Mate 20 Pro users in Canada.

Not too long ago, we saw the release of the official EMUI 10.1 roadmap for Canada and various other markets. In the said roadmap, the Huawei Mate 20 Pro was set to get updated sometime in mid-August.

Today, thanks to an update schedule from Fido, we now know that the update could come a lot sooner than expected, probably as soon as August 5. Other Canadian carriers like Rogers and TELUS are yet to release their respective timelines for the same but if history is anything to go by, these should follow pretty quickly.

Already, a good number of Huawei devices have been updated to EMUI 10.1, the Mate 20 Pro included. Mate 20 Pro users in regions like Sweden, Poland, UK, Slovakia, Macedonia, KSA, UAE, the Philippines, Ireland, and many more, have already received this update so Canada is a little late for this party.

We shall continue to follow the rollout of EMUI 10.1 and you can get a wider coverage of the same in our dedicated EMUI 10.1 tracker. On the other hand, Fido has now changed its OS update schedule as well and the EMUI 10.1 update for the device is labeled is “coming soon”. 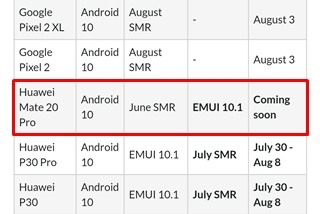