Find a detailed overview of the updates below.

The latest update by Sprint for the Samsung Galaxy S20 series is focusing on resolving the 5G network issue. The update arrives with version G981USQU1ATFD, G986USQU1ATFD, and G988USQU1ATFD. Here’s what the changelog reads:

Update to software ATFD or newer.

Also, ensure you are on Mobile Network Mode of Automatic:

* The device may reboot to apply settings changes if the automatic mode was not already set. This is normal.
Source

The new July update is available for Samsung Galaxy Note 9 that brings new features like Quick Share and Music Share. It hits the devices as version N960FXXU6ETG3/N960FOXM6ETG3 and is 112.10MB in size. 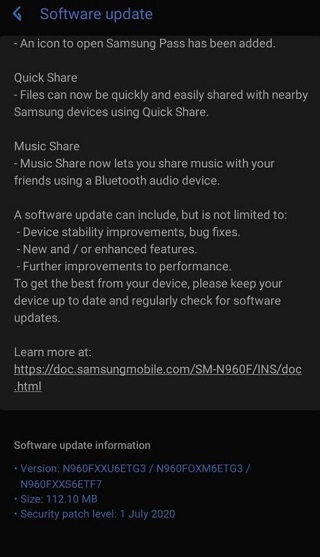 Samsung Galaxy M21 is picking up the July patch which comes with version M215FXXS2ATG1/M215FOLE2ATG1 and is measured at 118.95 MB. The update enhances the stability, security, and performance of the device. Here’s the changelog:

Changelog:
The security of your device has been improved.
Source

The July patch is also live for Samsung Galaxy S20. The device is now getting a second update, as earlier this month it received version G980FXXU3ATFG which brought enhancements to the camera, whereas the current OTA arrives as version G980FXXU3ATG4 (size: 178.41MB) and improves the security of the device.

Thanks for the tip, Somesh

The Global variant of Redmi 7A is fetching the July update while Xiaomi Mi 8 (Global) is getting the June patch.

The July patch arrives with version V11.0.3.0.QCMMIXM to the Global variant of Redmi 7A. The security of the device is enhanced with this latest update. Here’s the changelog:

Thanks for the TIP, Nidhin

On the other hand, Xiaomi Mi 8 (Global) is receiving the not-so-new June OTA which secures version v11.0.5.0.QEAMIXM based on Android 10. The system stability and security are improved. Below is the changelog:

Changelog
This update adds the wisdom of visual function, and optimize the photographic effect of the lower part of the scene camera, it is recommended You update.
[Smart Vision] Added smart vision function, turn on smart vision (eye icon in the upper left corner of the camera), you can perform image recognition shopping, scan calories, encyclopedia query, and translation operations.
[Camera] Optimize the camera’s photo effects in some scenes, with more natural colors. [WLAN] Optimize the stability of WLAN hotspot connection.
[System] Optimize the stability of the whole machine
Source

Honor 8X picks up the fresh July update which carries version 10.0.0.215 and the package size is 109MB. The latest security patches are applied with this OTA. Thanks for the tip, Aryan