[Updated] Xiaomi Mi A3 call recording support arrived with recent update, Mi A2 Lite allegedly gets it as well

The Xiaomi Mi ‘A’ series was launched to give users the opportunity to try out stock Android as part of the Android One program. This should mean that the devices receive major OS updates before most other Android smartphones. However, for the most part, this has been far from the truth.

Mi A3 users have witnessed a bunch of failed Android 10 updates after the update was pulled back multiple times. Thankfully, a more stable version rolled out a couple of months ago and keeps improving with subsequent updates. The latest brought the June security patch. Not only does the update bring the new security patch, but it also brings the much-awaited call recording feature. This was a highly requested feature and finally, Xiaomi delivered the option to Mi A3 users.

This information has also been confirmed by users who have received the call recording feature on the Mi A3, albeit with some issues while trying to use it. You can take a look at some early reports below: 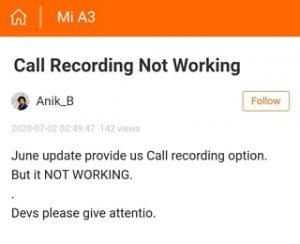 As you can see by these early reports, some users are running into issues while trying to use the call recording feature on the Mi A3. At present, it’s not clear whether the issue is widespread or affecting only a select few.

Just a couple of weeks ago, the company also brought the feature to the Mi A2 with the June security update. Furthermore, according to a Xiaomi mod, the feature is also available on the Mi A2 Lite, however, this claim is yet to be backed up by user reports. Nonetheless, with the feature now rolled out for the Mi A series devices, we can expect to see it make its way on to other Xiaomi smartphones. Speaking of updates, you can visit our MIUI 12 update tracker to keep track of the rollout for non-A series devices from the company.

The call recording feature for the Mi A3 is limited to beta testers in India. Head here for more details.