To make things more clear, most of the aforementioned smartphones are picking up June 2020 security update except Samsung phones, which are reportedly getting served with the July security update.

Let us look at the updates, one by one:

July 2020 security update is now live for Samsung Galaxy A50 and A71 while Galaxy S8 is picking up the June security update with several enhancements. Reportedly, Galaxy A50 is being served in Australia, and both Galaxy A71 and S8 are getting updated in China.

Here is the changelog for Galaxy A50 along with the screenshot:

[Improved fingerprint recognition algorithm]
– For better recognition, we recommend that you remove your fingerprints and register them again.
– The security of your device has been improved.

Below is the changelog for Galaxy A71 5G:

• New Camera features
– Single take, My filters, Night hyperlapse
• Other bug fixes
– The stability of Wallpaper has been improved.
– Improved Fingerprint recognition funtion.
– Improved battery charging algorithm and stability
– The stability of CMCC RCS has been improved.
※ Group chat service in RCS will be terminated. Group chat function will be deleted.
• The latest Android security patch has been applied.
– Device security has been further enhanced.
• MirrorLink funtion will be deleted.

Finally, here is the changelog for Galaxy S8:

• Other bug fixes
– Improved stability of Smart View connection with Samsung TV 2020 model.
– Fixes the issue that sometimes scroll is not smooth on call list screen.
• The latest Android security patch has been applied.
– Device security has been further enhanced.

Verizon LG V60 ThinQ 5G is getting the May 2020 security update with version number V600VM10e. The changelog mentions that this new update improves the performance of the device. As per a post on the Chinese community platform, Huawei AI Speaker 2 is getting a new firmware update in China. It is tagged with version V9.0.6.2 and brings various optimizations for the device. A new security update is live for Vivo NEX S in China with version number v8.10.2. It weighs around 138.84 MB in size. However, looking at the changelog does not reveal which month patch it is carrying, but brings some bug fixes for the phone.

Realme C3 is picking up the June 2020 security update with version A.33 in India, while Realme X50 5G is getting updated with version B.14 in China. Below is the changelog for Realme X50 5G update in China: Thanks, Vrushant for the tip!

Below is the common changelog for Narzo 10 and 10A update: June security update is now live for the Honor 10 Lite users. As per a Redditor, this new Honor 10 Lite update arrives with version number V10.0.0.201. 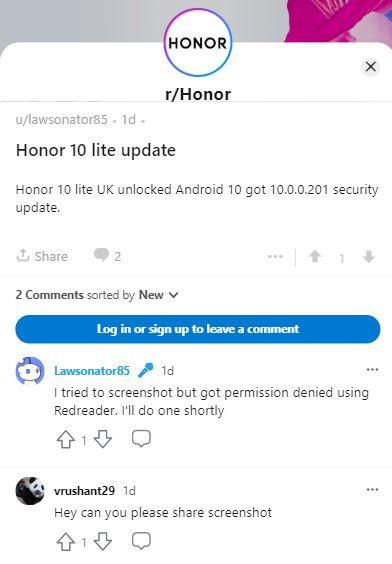 Thanks, Vrushant for the tip!