Fortnite is all set for the arrival of the new season. Today, patch 12.61 was released for the game & it brought a lot of enhancements & bug fixes for Fortnite. Data miners have revealed the details regarding an upcoming Doomsday event while digging up 12.61 update files.

Whenever any season ends in Fortnite, it happens with a big in-game event, the same will also follow for the conclusion of Chapter 2 Season 2. Earlier, players noticed the construction of a Doomsday device at the Agency.

The Doomsday Device has been updated!

It is more active! pic.twitter.com/xuh8BFh6Hl 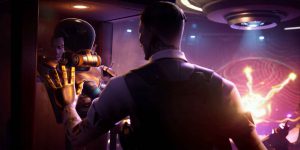 These details have been mentioned under the data mined file with the name athena.event. Fortnite in-game events have always been jaw-dropping & interesting, so we can expect the same for the upcoming event.

Data mined files further suggests that the Agency location will explode during the Chapter end event. FortTory has revealed rendered Mesh files which shows a hole at the bottom of the Agency. Have a look at the data mined images from FortTory down below. Considering storms, lightning, heavy rain & strong winds, one can surely say that the Doomsday event will be truly spectacular to watch. Apart from this, data miner, TheBriteFuture, has found meshes for Rift Beacons, which suggests its return to the game.

In another reveal, FNBRHQ, datamined code suggests that Underwater swimming will also be a feature for the game soon. Season 3 of Fortnite will kick off on June 3, & currently ticking Doomsday Clock will run out at 20:05 CEST on May 30. So, a lot of interesting events are likely to take place when the timer ends. For more news on Doomsday events, stay tuned with our updates.