Realme 2 Pro is scheduled to receive the stable version of Realme UI 1.0 based on Android 10 OS this coming month of June 2020. Ahead of this release, the company has already pushed a couple of beta updates to the device.

The two Realme 2 Pro Realme UI updates are limited to select device owners, which explains why your unit hasn’t picked up the new OS. 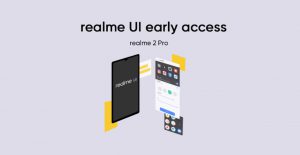 Like others before it, Realme 2 Pro received a truckload of new features, optimizations, and bug fixes with the update to Realme UI. However, it appears that even more features are being lined up in a future Realme UI update.

When first asked about enabling the external microphone for recording videos on the Realme 2 Pro, company support said the feature will be included in Realme UI update. With the update here and the feature missing, the language has changed. According to Realme India support, Realme 2 Pro owners will surely be able to record videos using an external microphone. However, this will be enabled in a future Realme UI update and not the current version that brought Android 10.

We apologize for the inconvenience caused to you. We would like to inform you that as of now realme 2 Pro does not support the same but it will support in the future updates of realme UI.
Source

In case you didn’t know, the Realme 2 Pro Realme UI update will be its second and final major OS upgrade. Matter of fact, the company has already confirmed that Android 11 (Realme UI 2.0) will not come to the Realme 2 Pro.

Granted, it’s one of the future monthly security patches that should enable the use of an external microphone in the camera app of the Realme 2 Pro. For now, you’ll need a third-party app to get going, which is what device owners don’t want.