It is always refreshing to receive the monthly update as they bring along various enhancements to the device. Xiaomi Redmi 8 (India), Realme X2, and Realme X, Verizon Samsung Galaxy Note 10+, Samsung Galaxy Z Flip are the devices being served with the latest May security updates.

Mi 8 (Russia) is receiving the April Security patch though and finally Honor Band 5 is picking up the firmware update. Let’s take a look at the details.

Mi Note 10 Pro picks up the latest security patch. This update ensures improved system reliability and reduces system latency. The OTA is provided by the build number V11.0.7.0.QFNEUXM. Click here to download it.

Next Xiaomi device in the line to get the update is Mi 8 (Russia) which is picking up the April patch. The version for this OTA is V11.0.3.0.QEARUXM and size is 452MB.

If you haven’t already received it, you may download it here.

Redmi 8 India users are now receiving the latest May security update. It arrives with the version V11.0.11.0.PCNINXM which is sized at 353MB. You can get the download file from here. Realme has also released the May OTA to its Realme X2 and Relame X (China and EU variants). It seems this OTA brings increased security and fixes to the existing bugs for both the devices.

● Fix the problem of probabilistic power jump during charging

● Fix the problem of prompting foreign objects during charging

● Adjust the height of the status bar 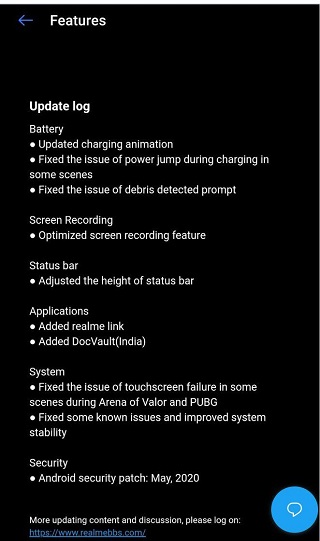 This update is scheduled to be forwarded to all users in two weeks’ time.

● Optimize the game experience in some scenarios

● Fix the error of loading information after system update

Verizon has released the May OTA to the number of Samsung devices simultaneously. First up in the list is:

This update provides the most recent security patches in order to increase the security of the system and the estimated time to download this update is 6-10 minutes. It arrives with the Software Version: QP1A.190711.020.N970USQS3CTD6.

The latest update brings the bug fixes with the newest security patches. The build edition for this is QP1A.190711.020.N975USQS3CTD6. The OTA comes with the build Software version: QP1A.190711.020.N976VVRS3CTD6 offering improved security to the device and resolve the existing issues.

Samsung Galaxy A20 is the last in the Verizon update list for now. The update brings along bug fixes and the latest security patch to make the device more secure. The Software Version: PPR1.180610.011.A205USQS5ATE3 comes with the OTA.

Changelog
The current software update provides the most up to date Android security patches on your device.
Source

Finally, Honor Band 5 picks up the most recent firmware update. The update aims to improve the user experience and will also fix other known issues. For this firmware update the version is 1.1.0.150 which is estimated at 3.49 MB. The devices listed above are the ones getting the recent monthly OTAs. We’ll hold you in a loop with other fresh updates.

Next article [Live in Thailand] Samsung Galaxy Fold One UI 2.1 update hits devices in the US