Dragon Ball FighterZ has received a new update today & the new patch has arrived with version 1.23. The game was first made available in 2018 & it can be enjoyed on PC, Xbox One & PS4. The game is immensely popular & has received a positive response from all Dragon Ball fans.

Speaking of Dragon Ball, it is one of the most popular franchises, & a plethora of movies, episodes & games have been made on it. The game has been developed by Arc System Works & has been published by Bandai Namco Entertainment. Cut to now, the patch 1.23 has brought a new character to the game. Yes, you heard it right, Goku Ultra Instinct form has joined the game’s roster. Starting from today, it will be available for play. He is the second character under Fighter Pass 3. Bandai Namco has also shared the trailer for the newly introduced character Ultra Instinct Goku & it teases his fight with kefla & Jiren. One can surely notice, a glow on Goku’s body when Ultra Instict form is activated.

The latest update for the game has brought many quality of life improvements to the game. Players can now use Zeni & Premium Z coins to purchase a variety of new items. Minimum number of required players for FighterZ Tournaments & custom tournaments has been reduced from 12 to 4.

Coming to arena matches, players can now use special rules. A lot of uses have also been fixed related to fighting mechanics. All in all, this update is pretty good & it has improved the stability & performance of the game. You can check the complete patch notes down below. 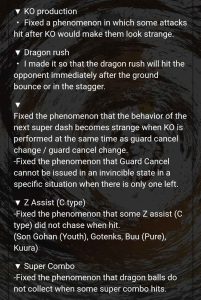 For a quick refresher, Bandai Namco added Kefla to the game on February 28. Speaking of Kefla, it is the Potra fusion of Caulifla & Kale. She is from Universe 6. For more Dragon Ball FighterZ updates stay tuned with us.