Call of Duty Modern Warfare & Warzone recently received an update with version number 1.20 & 1.03 respectively. The latest patch has brought a lot of enhancements & improvements for the game.

But with the new update, many players are also consistently facing server issues. For many players, the ping has spiked up to 200. Modern Warfare Reddit forum has also filled with many reports regarding this ping issue. Have a look at a few complaints below. Well, Infinity Ward has not recognized this issue yet, but we certainly hope devs will look into this matter at the earliest as it is currently troubling many players & affecting their performance in matches online.

Apart from this, many Call of Duty Modern Warfare & Warzone players are also reporting issues with voice chat & game chat & it is broken for many of them. A lot of reports can be found on Twitter regarding this issue. Have a look at a few reports down below. But there is a sigh of relief regarding this problem as Activision has officially acknowledged the issue & has said that they are currently investigating the problem. Well, we are keeping a close tab regarding this matter & will update you with more information whenever it arrives. Apart from this, another update has gone live for the game which has fixed the issues with Gunsmith Custom Loadouts. Also, a bug has been fixed where players were getting stuck during the infil while loading into a BR match. You can check all the fixes for April 30 update down below. 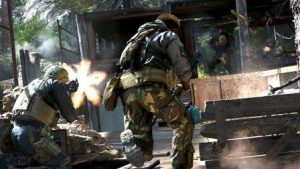